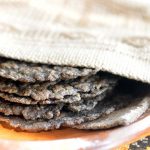 For this recipe, I tried to go completely off the range (for better or for worse). At the very least, it’s worth noting that I not only achieved my goal, but the final tortilla was tasty and worth sharing... even if the lone tortilla is as chewy as can be.

If you read about corn tortillas, you’ll see that the basic recipe for a corn tortilla is: 1 3/4 cup (420 mL) masa harina, 1 1/8th (250 mL) cup hot water and a smidge of salt. Any variation of this recipe is only off by a few grams, yet there are about 17 million unique results for the google search: Authentic Mexican Corn Tortilla Recipe

I knew that if I searched for a Paleo Tortilla or a Keto Tortilla or a Low-Carb Tortilla that I’d essentially unearth 2 or 3 variations of the same basic tortilla. And, chances are, they’re probably pretty good!

Some of the time, it makes total sense to add a variant of a popular recipe within a dietary philosophy. Like the tortilla example above, making any specific thing is usually done within a fairly narrow set of guidelines. That's how it becomes a thing you know and can rely on. If you want to have a complete set of recipes within a system, some of the time you’re doing to more of less kinda duplicate something, just in an effort to make a complete set.

I wanted a tortilla, but I also wanted to completely make my own. I didn’t want to read about other tortillas, as I didn’t want to taint my thoughts. I wanted something new... a 4th possible entry into the paleo/keto tortilla space. So, I took my knowledge of flours and fats and liquids, slapped on my sombrero and went pioneering.

The end result? Pretty... pretty... pretty... pretty darn good! The end result was ever so slightly on the rustic side (which has its charms). It was dark in color, which is fine. Let's call it a blue tortilla. I was REALLY worried that the tortilla would crack and split, when loaded with goodies (like so many tortillas I’ve tried). It didn’t! It held its own! It was the right thickness and was flexible and pliable. In the end, they worked!

I had a bunch of leftover turkey lying around, with some salsa and other odds and ends. I loaded up a nice taco and slammed it. It completely hit the spot. *patting myself on the back*

Later, I was cleaning up. I had a few stray tortillas stacked on the counter. I had a friend helping me clean up, as well. I tore off a big section of a cold tortilla and put it in my mouth for a nibble. Nice! It’s a nice texture, the salt is nice, it’s got a bit an earthy whole-grain taste, but even cold and solo... not bad!

Then, I kept chewing. And chewing. As I chewed, the tortillas texture broke down and the surface lost its shape. It turned into a bit of a chewy wad. I took a big gulp of water and slid the whole thing down my throat.

I looked at my friend with kind of a perplexed look. I could tell that she my thought. She looked down at the floor, then she looks up at me and says, “Como chicle, ¿verdad?”

Well... It’s a start! It was fine when full of goodies, but I’ll admit that a lone cold tortilla came across... as a bit of a mouthful. Next batch, I’ll cut the glucomannan in half (this change is not represented in the recipe... the original amount was and still is 1 tbsp [15 mL]).

In a final twist, after I send this, I’m going to get loads of notes saying how this is just like every other recipe out there! Ohhh... let’s hope not!