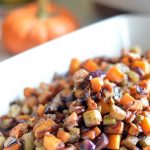 Hash is a name stemming from the French word hacher, which means “to chop”. You more than likely know of hash as Corned Beef Hash. When I was a kid, I worked in a restaurant that had a potato and fennel hash, served with a lightly smoked tomato sauce and pan-fried sole. I'll never forget it, because the recipe included a big fried fish bone. Hash Browns are another way in which a hash exists in common dietary circles (though, that’s usually more shredded than chopped).

In this particular case, I’m making an Autumn Mexican inspired hash for a holiday setting. Often, pumpkins and squash have a somewhat high carb count, so they’re seen as a bit taboo. Another of my tricks is to bulk out the taboo ingredient with something lower in carbs and complementary in flavor. This is where the chayote comes into play. It’s a very neutral tasting squash, but if fries up lovely and looks and tastes the part. The addition of the pecans helps to add bulk, while also adding some nice fats and a bit of a crunch. Fantastic stuff!
Prep Time10 mins
Cook Time30 mins
Total Time40 mins
Servings: 12 Servings
Calories: 110.80583333333kcal
Author: DJ Foodie