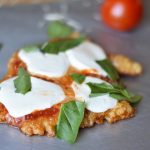 It’s always interesting to me the way ideas come about and clash into other ideas. This idea came about as a way to use a breaded pork cutlet as a base for a pizza. Ultimately, the plan was to suggest a variety of toppings, from pepperoni, to Hawaiian, to a Meat Lovers’ Supreme. I considered listing a vegetarian topping, then realized how silly that would be and considered dusting it with bacon bits.

To illustrate the point, I decided to go simple and bare bones, using just a small amount of fresh mozzarella on the top. I didn’t want to overload it, opting instead to leave the creativity to you.

Then, however, when I pulled it out of the oven, I looked at it and … instantly I realized that I’d just made Chicken Parmesan, but … with Pork. I didn’t mean to, but when I was done, it was undeniable. I needed me some Squaghetti! Having none lying around, I decided to go back to the pizza idea and pretend that was my plan, all along.

I dug up my big pizza peel, put the pork on it and took some photos.