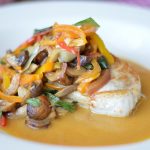 This recipe was inspired by a combination of this recipe, from AllRecipes.com, and the ingredients lounging in my fridge (I must’ve been out of tomatoes!). My approach is kind of a cross between a pan-roasted pork chop and a stir-fry, with a tasty buttery broth.

I’m a huge fan of cooking things in the oven. I suspect it’s carryover from working in restaurants, but I like to have a hot oven ready to take whatever I throw in it. See, when cooking something in a pan, an enormous amount of direct heat is from only one side The other exposed side is getting small amounts of ambient heat, but... mostly, it’s just sitting around being warm. Getting food in a hot pan, then throwing that hot pan into the oven is a great way to get a nice seared color on one side, but additionally getting heat all around the food, from the top, bottom and all the sides. It’s faster and more even. Right up my alley!

(It should also be said that these are some of the reasons people love my food, but hate it when I cook in their homes... I get everything all smoky and greasy!)

Anywhooo... I load this all up in a hot pan (or two), then throw them in the oven to cook. Halfway through, I stir and flip the chops. Finally, I remove the pans, remove the chops and let them rest, while I hit the pan with some wine, a bit of chicken broth and finally... thicken it up with some nourishing butter.