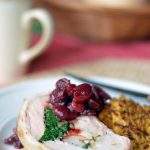 This one is a little embarrassing. Now, keep in mind that this was perfectly cooked, tender and full of flavor, but I’m embarrassed by its overall color.

I am currently staying in a rental house. As with any rental, you get what you get. You can’t control certain things. I remember being very excited by this house when I first say it and specifically signed the lease because of the gas stove and oven. I truly felt I’d stumbled into a the perfect bloggers kitchen!

Then, I used the stove. It’s weak. And cheap. It’s as if the pipe going from the propane tank to the stove is as thick as a very narrow strand of hair. It emits heat roughly equivalent to a Bic lighter. When I preheat a pan, I let it sit on the burner for a good 5 minutes before I but anything in it, otherwise it more just steams and festers, rather than pan-frying like a good pan should do. I’ve grown accustomed to the weak gas line and know tricks to get around most of the issues, but... browning things in the oven can be a challenge. I’d estimate that HIGH is about 300 F (149 C), which is enough to cook a nice roast (and keep it nice and moist on the inside), but with no broil option and no way to get any extra heat... my roasts often come out looking like (I fully apologize in advance for the following description, but it’s what I see!)... a naked baby piglet. There’s just a pink pastiness to it that’s a shade unsettling.

So, now that I’ve revealed my frustrating kitchen situation and forever ruined the visual element of this lovely little dish, let me try and sell you on the flavors!

This is two pork tenderloins (like pork filet mignon), split lengthwise (butterfly-style), and opened up like a book. Both sides were seasoned with salt and pepper. Then, they were laid, side-by-side, on a lattice patterned sheet of bacon. From there, they were stuffed with freshly cooked spinach, slices of raw sweet d’anjou pears and a small mountain of parmesan cheese. This was rolled together into a nice consistent cylinder, then roasted!

Note: Here’s a video showing how to create a bacon weave. Also, here are two photos showing what the stuffing looks like, before rolled…

The end result was a (mostly) beautiful pork tenderloin roast! I personally have no problem with bacon that isn’t super crispy. The salt and smoke still contribute nice flavors. The fat also helps add moisture, as does the cooking to a proper temperature. So often pork is overcooked due to outdated fears of trichinosis. The USDA actually lowered the recommended internal temperature for pork, about 5 years ago. It used to be 160 F (71 C), but they dropped it to 145 F (63 C). This makes for a far more pleasant meal! And, it’s actually even a bit better than that! If you take it to 136 F (58 C) and the internal temperature stays at least that warm for 3 minutes, it’s also fine. Below this line in the sand, it starts to get a bit challenging. For example, the USDA allows pork to be cooked and served at just 120 F (49 C), but they require it be held at that temperature for 21 hours. This, I assume, is for sous-vide cooking.

Anywhoo... The lesson here is that a medium-level pork is safe and delicious! The cheese also helps with the fat and gives a bit more salt. The pear is like perfumed little sweet nibblets of goodness. The spinach is there to add color and a nice nutritional burst! Pasty or not, once this is sliced up, it’s phenomenally delicious. It’s completely worth it, even in the slowest and lowest of ovens.

I think next time... I’m going to use my smoker for this.