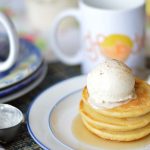 This recipe is part of a massive blog post on ice cream, including all my ice cream secrets. If you really want to learn the basics of an AMAZING, soft and scoopable low-carb ice cream, I highly suggest reading this post.

I should also say that this recipe was originally conceived as a standard sugar laden ice cream recipe that I made for friends and family, as an alternative to whipped cream on their pumpkin pie, during a Thanksgiving celebration, many years ago. It was just a Maple Syrup Ice Cream made with real Grade B Maple. I hadn’t yet layered in the brown butter part.

I don’t know that I’ve ever had a Maple flavored ice cream before, but the thought just sounded incredibly appealing. The result far beyond surpassed my expectations. The lovely homemade pumpkin pie sat sadly in the shadow of the mammothly popular ice cream. From there, I’ve tinkered with the formula every year for Thanksgiving.

Recently, I made it to top my little Carrot Pies that I made for Thanksgiving. As fantastic as the carrot pies were, the ice cream still stole the spotlight. Something about the browned butter, combined with the maple flavor resulted in something that just felt like pancakes. I wouldn’t call this “Pancake” flavored ice cream, although I probably could. It’s just that the taste combination reminded me of pancakes, so much so that I felt the need to whip up a batch and adorn a pile with a lovely scoop.

The moral of the story? If you ever want to put ice cream on your pancakes... you could do A LOT worse!