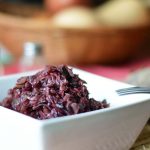 One of my favorite things to do is to tickle the taboo. I get emails and comments from people all the time saying things like “pineapple isn’t low-carb!” and “carrots aren’t keto!”. I would never want to swap someone away from something that’s working for them. If avoiding even a whisper of pineapple or carrot is working for you... keep it up!

For me, however, I don’t find that level of restriction is all it’s cracked up to be. If the general goal is 10 net carbs or less, then... there’s wiggle room! If I’ve got a chicken breast and it’s looking a little sad and alone, and it’s mango season, I might throw some very thin slices on there, with maybe a squeeze of lime, some chilies and handful of cilantro leaves. “GASP. MANGO?!”

Anywhoo... I love beets. Beets tend to be another one of those frowned upon root vegetables, due to its higher sugar content. So, again... I’m going to use them thoughtfully!

The addition of the beet gives this cabbage a nice little boost of sweet, plus it carries through more red color. I also added red wine, which also lends some color and character. Wine is also another oft frowned upon ingredient, but the alcohol is burned off and a dry red wine has few carbs, otherwise. Now, in the old days, I’d probably have used something like a Port Wine, but that’s too much sugar. Instead, I opted for a dry red, but added a touch more sweetener, just to give it some pop. It’s also got red onions and garlic. A really nice and flavorful little side dish! Ultimately, I served it with another taboo dish... a pork tenderloin stuffed with spinach, parmesan cheese and a diabolical pear or two.

Oh, how I love life on the edge!

Note: Some of the time I withhold bacon. This was one of those times. I might suggest, however, that frying up some bacon in advance, then cooking this in bacon and bacon fat... well... I might suggest it’s a good idea!
Prep Time10 mins
Cook Time40 mins
Total Time50 mins
Servings: 12 Servings
Calories: 65.656666666667kcal
Author: DJ Foodie