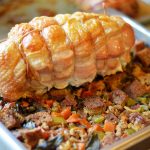 I don’t know if stuffing reserves that perfect space in my heart because it’s just that wonderful or because I only get to eat it once a year. It’s probably a combination of the two.

I just know that I genuinely love it, because back in my darker days a box of Stove Top would occasionally find its way down my gullet. Thanksgiving or no. I definitely love the stuff!

The challenging part of stuffing, in a grain-free/low-carb/keto/primal world is, the bread. Most Thanksgiving variety stuffings consist largely of bread. In fact, stuffing is basically seasoned and moistened bread; be it French, sour-dough, cornbread, English Muffins, Challah, yada yada yada...

Most all of us reading this really try to avoid these delectable detestable things.

This begs the question: How to make a bread based stuffing... without bread?!

I’ve tried making a holiday stuffing several times in the past. I’ve always turned up something tasty, but the bready element always disintegrates and turns more into a kind of nutmeal. Tasty, but it loses that fluffy-gluey stuffing vibe.

Then, I started reading more about more about gluten-free baking and started baking some of those ideas into my treats. Practice makes perfect! So, this time around, I used my focaccia recipe as a base (something I often do). I layered in some gluten-replacers to give it a greater durability. Then, to really reinforce the bready texture, I cut up the focaccia into substantial cubes and toasted/dried them in the oven. Armed with my tough and dry focaccia croutons, I gave it another whirl. Huzzah! SUCCESS!!!

Now, some of you may look at the ingredients and roll your eyes. I know of no other way to give this the structure it needs to hold together, without using standard bread. I’ve tried to do it with a more simplistic blend and it simply didn’t hold together. Some of you deeper down the path, though... you’ve probably already got this stuff!

Anyhoo... here’s the rub: I like to feel I present my recipes honorably. When they’re over the top, I call it. When they’re abysmal, I call it. You, dear reader, can’t actually taste these recipes. I taste them for you. I need to be forthright and share my honest opinion. Provided the recipe is an interesting read and has a lesson or two, I’ll post it, regardless of the quality of the final product.

This stuffing? Easily the best and greatestest grain-free/keto-fied turkey stuffing I’ve ever had or ever made. In fact, it’s probably even the best I’ve ever heard of or read about. BUT! I’ve got a friend who was visiting when I whipped this up. She follows my shenanigans and has dropped something like half her weight doing so. She agreed it was definitely the stuff, but she also blurted out, “My sister would call this diet food!”. And... you know... she’s right! Because of the nuts and seeds there’s a richer earthiness to the flavor that I personally have grown accustomed to and actually enjoy.

My point is, I don’t want to pass this off as competition to Stove Top. It’s bananas and tangerines. It’s a truly outstanding version of what it is, but... it ain’t Stove Top.

I loved the croutons out of it, anyway!

I should also add that the LEFTOVER stuffing was even better. Some of the sharper-earthier notes were diminished by time in the fridge.

The only reason I really present this in this manner is because... it’s a family holiday. Not everyone eats like me (although, they should ? ) The bacon, sage and addition of ground turkey, homemade turkey stock and other flavors all bring this together as a truly wonderful stuffing. However, any extended friends or family members who are looking forward to Stove Top... They’ll like this and they’ll probably eat it, but... they’ll notice. Uncle Mortimer might even toot in retaliation.

You, on the other hand, the one who cooked it... will love it!

So... if you’re reading this and plan to bring the stuffing, or share with Uncle Mortimer... maybe split this one down the middle. Take two bowls. Put half the designated amount of grain-free croutons in one. In the other one, place a blend of toasted French baguette and bagel croutons. Then, cook all the other ingredients and split them in half, with half going on the grain-free bowl and the other half into the more standard bowl. Mix, put into two separate pans and bake separately. This is playing it safe. Just a thought. We’ve got enough to argue about on Thanksgiving, ya know?

It’s good. It really is. Tops! However, there’s this echo that ripples through my mind from my brother when I bake with nuts and seeds. “DJ, your baked stuff, no matter how excited you are, and no matter how delicious it looks or smells... it’s really only ever as good as the worst version of the real thing.”

Note: I make the bread and croutons the day before. This frees up the oven the next day for other things, while also giving the croutons a bit extra time to dry.
Prep Time1 hr
Cook Time2 hrs
Total Time2 hrs 15 mins
Servings: 12 Servings
Calories: 504.47083333333kcal
Author: DJ Foodie