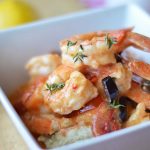 In the South East United States, there’s a famous dish known as Shrimp n’ Grits. It’s a corn based dish and not really something I find myself eating, any longer. However, it was largely the inspiration behind this more Mediterranean approach to a similar dish.

It also employs a pure almond polenta, which is surprisingly adept at polenta'ing! It’s a bit sweeter in nature, but it’s quite good and goes REALLY well with this dish. It’s also incredibly easy to whip up! Take a look at this recipe from Low Carb Yum to see a variation of my polenta ratio used in a casserole. Yep, it’s a versatile little recipe!

To steal a term from Sandra Lee, I MIGHT could maybe make the claim that this recipe is semi-homemade. As much as I love super fresh shrimp, I love not having to clean and peel them even more. I’ve peeled so many shrimp tails in my life, the number is best stated in scientific notation. I’m simply done with it. Now, it’s not uncommon for me to buy raw, peeled shrimp in big frozen bags. This recipe also uses roasted peppers from a jar. I’ve also roasted 34 x 107 peppers in my life. The ones in jars and cans are pretty good, actually. Saves me time and grief, too!

I also use olives from a jar, but this is pretty common. Most people don’t brine their own olives. Even restaurants rarely do it.

All this adds up to a rationale that is very satisfying, semi-fresh, definitely quick and fully n' totally nourishing!

Here’s a photo of the ingredients I used:

Here’s the amount of time it took. Yep! Even with 2 pans going, it still took me less than 9 minutes to get from the shoddy iPhone photo of the ingredients, to the lovely beauty shots at the top of this page.