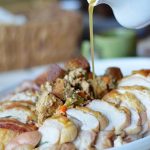 On that note, I'm going to fly right square in the face of tradition.

Look at just about any photo of a Thanksgiving dinner and you’ll see it taking up its rightful place as the King of the Table. A full, substantial and beaming golden turkey adorned with sides of cranberry salad, yams, green beans, stuffing, gravy, winter squash, mashed potatoes, corn, biscuits, monkey bread, pumpkin pie and all manner of other regional family favorites.

I propose a somewhat different approach to that giant turkey spread.

Why? It tastes better!

It also cooks faster and, all total, is probably just about equally complex as a full roasted turkey. It’s maybe a bit more technically sophisticated and challenging, but the final roasting and slicing couldn’t be easier. This approach front loads all the effort and yields a far tastier bird!

I’ve enjoyed over 40 Thanksgivings in my life. I’ve also roasted, smoked, brined, wrapped in bacon, and otherwise cooked hundreds of turkeys in my life. Of all my experience with turkeys, I’m here to tell you... this approach is worth it. It’s the best I’ve had. While I acknowledge that the big reveal doesn’t end in a full roasted bird, it does end in a lovingly pre-sliced assortment of succulent juicy turkey. It also can and does present equal wow factor. Plus, rather than figuring out who will slice the turkey and fiddle around with the bones and knives and hot flying turkey juice, it’s all just set, carved and ready to go onto the plates of loved ones (and that one weird +1 that aunt Kelly brought)...

Every Thanksgiving, it seems like there’s a huge burst of information on turkey tips. Butterball even has over 50 experts standing by to discuss turkey tips. If there’s any true common and consistent issue it’s how to keep the turkey from being dry.

Assuming you’re doing a full bird... a good brine will help a great deal. I’ve brined all my turkeys going back 20 years. There are many reasons why brining works, but the quickest explanation is that the brine causes the meat to absorb moisture, increasing the total weight by about 6 to 8% of pure seasoned water. This excess moisture largely stays put throughout the cooking process, yielding a turkey with a higher moisture content. Additionally, the process causes some of the proteins to turn to liquid, while also denaturing other proteins, trapping more liquid in the process. Plus, salt is a flavor enhancer. The addition of some salt boosts the flavor!

Also, don’t overcook it. This is obvious, but it may be less obvious WHY you might be overcooking it. Turkey should be cooked to an internal temperature of 165 F (74 C). Before cooking, make sure you have a reliable and calibrated meat thermometer. Then, cook the turkey to 160 F (71 C). Remove it from the oven, wrap it or cover it and place in a warm area within the kitchen. Allow it to relax for a good 15 minutes. The heat still trapped inside the bird will carry-over into deeper parts of the bird. Typically, they say you can expect a rough 5 F (2.75 C) increase in internal temperature, by using this approach.

That’s right, even outside your oven, the turkey will continue to cook... gently rising to the correct temperature of 165 F (74 C). By taking it to 165, then removing it, it’ll actually be 170 F by the time it hits the table, which is a point where it starts to dry out. Don’t do that.

I should also point out that this is where you stick the thermometer into a turkey to test its temperature. Stick it deeply between the thigh and breast. In this photo, the bird is a shade overcooked in my opinion, but I like life on the edge.

Other tips...
Add fat: Rub fat (usually butter) under the skin, above the breasts. This helps add a little fat. Maybe this is true, but most of it will just melt out. You could use a larder to pierce the meat and literally infuse the muscle with fat. This will help more, but it’ll create puncture holes.

Flip the bird: You can roast the bird upside down. They say that typically the breasts cook faster than the legs, so flipping them makes a little sense. More direct oven heat on the legs, while the breasts get indirect wet heat and steam. It’ll also “self-baste”. Juices will run “up”, rather than down. It can give the bird a little bit of an inconsistent look, though. A similar approach is to cover the breasts with foil, which theoretically drops the temperature around the breast to an indirect wet heat. Meh. Maybe there’s some truth to this, but I wouldn’t count on it. It will, however, stop any browning that may be occurring (good, if you’re burning it, bad if you’ve got a pasty white bird).

Defrost: If you read my blog post on freezing foods, you’ll see a fresh turkey will serve you better than a frozen one. Also note that it’s best to defrost in the refrigerator, slowly, over the course of days. Don’t wait until the last minute to defrost it. A small bird can take 2 days to defrost thoroughly, whereas a large 25-pounder can take almost a week! If you MUST defrost quickly, do it in a very large bowl in the sink, with a slow stream of cool water streaming over the bird, into the bowl. This will help, but it takes a while to defrost the center. Consider the proper approach and time to defrosting.

Go smaller: Two smaller turkeys will roast more quickly and more evenly than a huge 30-pounder, for a large gathering.

Chill the breasts: The morning before roasting, place it in the sink with a big bag of ice resting over the breasts. The theory here is that the breasts will be thoroughly chilled, while the rest of the bird is a bit warmer. By the time it’s done roasting, the whole thing will be perfectly cooked, as the temperatures all even out. This one feels a bit voo-doo-y to me, but I suppose there’s some logic to it. That said, I’ve also heard hot water freezes faster than cold water. Some of the time things aren’t what we think they should be. I don’t know that this is a theory I’d want to test when I’ve got Grumpy Grandma Sally coming over!

To stuff or not to stuff: I don’t stuff my birds with stuffing. I may throw some herbs and aromatics in there, to give flavor to the meat, but I keep it loose. Stuffing adds density, which increases cooking time and the very very center of all that stuffing may not be cooked thoroughly, while the outside is overcooked and dry. I’ve seen people cook the stuffed turkey to the correct temperature, then pull the stuffing out, put it in pan and continue baking it. This seems like a complex process which is just as easily solved by starting it in the pan and then later smothering with gravy. (mmmm... graaaaavyyyyy... )

Fry it? I’ve never done this, but to me it feels dangerous. Fried foods are typically awesome, and I suspect a fried turkey would be fantastic, but... I’ve had oil burns too many times to want to fry a whole turkey. For me, the juice wouldn’t be worth the squeeze.

So, now that I’ve shared my thoughts and tips on a whole turkey, here’s where I say... I do almost none of those things.

I do start with a whole turkey. I do! I then bone it, roast the bones (to make a stock with), and brine the breasts and leg meat overnight. The next day, I wash and dry the turkey, while the stock simmers and reduces. I lay the thighs on top a sheet of raw bacon, throw some herbs in there, then wrap it up. I also flip the breasts and smoosh them together (imagine two people lying in bed, head to toe). The idea is, breasts are bigger on one side than the other. By flipping them, throwing some herbs between them, then tying them together, the overall roast is more consistent in diameter and will roast more evenly. Then, I roast the two roasts, while I slowly drain the turkey stock as it makes its way into stuffing, mashed whatever and gravy.

The turkey roasts up right quick, making for a speedier meal. It comes out of the oven MAJESTICAL! Remove the twine from the roast, slice and serve. It couldn’t be easier! Oh, and... soooooo juicy!

Super Important Info: There’s no reasonable way to describe the process of boning a whole turkey without a clear and focused series of photographs or illustrations. Even better, a video. I’m slowly accumulating equipment and conducting small tests. In the interim, the best I can do is share an existing high-quality video.

How to Bone a Turkey: https://www.youtube.com/watch?v=GODGVtQ-AOc

There are many different ways to bone a turkey. I watched 20 different videos, each showing different approaches. This gentleman’s method is similar to mine, although I usually remove each breast individually.

How to Tie a Roast: https://www.youtube.com/watch?v=rFIwbUBiRSE

Keep in mind that this is a perfect beef tenderloin, but the tips and approach can be applied to this recipe.

Final Note: This recipe assumes that you have a full boned turkey, split into 4 separate pieces: 2 breasts and two thighs with attached leg meat. It also assumes that you have the corresponding bones. One COULD just buy the boned meat to create this recipe... and that would be fine, too.
Prep Time1 hr
Cook Time1 hr 30 mins
Total Time1 d
Servings: 12 Servings
Calories: 728.675kcal
Author: DJ Foodie