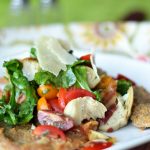 Here’s a really fun one! It’s a big tender pounded out chunk of pork, breaded and fried. The idea is to have such a substantially wide Pork Milanese that it covers the entire bottom of the plate. This is then topped with a glorious and flavor filled salad!

This is another recipe attached to my quick meals blog post. Each recipe is 15 minutes or less. Here’s my last-minute iPhone shot of the ingredients I used.

This one is a bit funny. It’s one of those times I wished I’d been filming, because I hit a bit of a wall.

See, I’m literally racing the clock while pulling this one together. I’ve never performed this recipe before, so I don’t have it 1000% dialed in. I’m kind of winging it. I don’t KNOW I can do it in under 15 minutes. I just assumed I could. Usually when I cook for the blog, I have people over who help me eat it all. So, with a small crown watching, I shushed everyone and started the timer, setting off a chain reaction of flailing arms, legs and pork parts.

Usually, when I pound out pork, I use pork loin. Fried pounded out pork loin is common because loin doesn’t have much fat and is very easy to overcook, rendering it dry. By pounding it out, it tenderizes it. By breading it and frying it, the breading absorbs and holds some fat, which adds moisture to the cut. However, the key to MY thought process was... “Hey, I’ve got some leftover pork butt. I could pound the dickens out of it, to tenderize. It’ll make for a lovely little cutlet!”

My logic was sound, but I didn’t realize how much tougher pork butt (the pigs shoulder) is over a pork loin, which runs along the spine and isn’t used for as much work. Butt, to me, is something to me slow cooked and softened over time. I’ve simply never tried this!

So, I gathered myself together, I made my breading, I had my salad all set and ready to build... all was moving along swimmingly, but I was eminently aware of the ticking clock. I still had to fry up the pork. So, I cut a nice pork steak from my butt, put it between two pieces of plastic wrap and started to whack at it with the bottom of a pot. It wasn’t entirely unlike whacking at one of those super bouncy balls you can buy from a vending machine at Chuck E Cheese. It was tough and highly resistant to my attack.

So, I whacked and whacked, barely making a dent in this tough cut of meat.

Now, to frame the moment... While I’m thinner than I used to be, I’m still a large man. I had people over. I had a ticking clock... and time was running out. I whacked even harder, elevating the spectacle.

Rather than give up, slow down, or stop to think and rationalize, I just started hitting the pork with the EDGE of the bottom of the pot. This helped, but it was still tough as all get out. I whacked and whacked. The plastic wrap started to wrinkle and shrivel and little bits of pork juice started to fling and splutter.

I grabbed my biggest and heaviest chef’s knife and started whacking at it with the backside of the blade. This helped a lot and got it moving, but I had to whack in a rapid-fire motion, ratatat-tat! Machine-gun pork pounding!

Once I used the back of my knife, the butt began to give in and relent. The meat FINALLY began to smoosh outward and flatten. I alternated between the back of my blade, the edge of a big soup pot, and my forehead (just kidding!). After a solid 120 seconds of sloppy relentless pounding, I arrived at the thickness and shape I was looking for. I breaded that sucker up, fried it and slapped a salad on it. I came in more than a full minute under my goal of 15 minutes and it was tender, flavorful and delicious.

A mess and a loud dramatic display, but that didn’t stop anyone from devouring it, the moment I turned my back!

The moral of the story? DJ Foodie needs to buy hisself a Mjölnir!