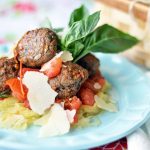 Anyone who has taken a look inside my freezer knows I love sausages. Sausages come in a seemingly infinite variety of flavors, including seafood and vegetables. They’re as varied as there are a huge number of uses for them. They're great alone, in sandwiches, in salads, in soups, coated in sauce, etc.; such an interesting and versatile creation. I ? them and I love that I can just walk into the store and have everything from Hot Italian to Curried Duck with Raisins.

Meatballs are another very similar concoction. In fact, I could argue they're the same beast, but without the casing (I won't, though). It almost seems silly to have a recipe for meatballs, in that there are billions around the internet, but I thought including one was a great way to spell out some interesting ideas.

Firstly, meatballs are essentially just raw meat with stuff added to it. The meat is divided into small portions, rolled into nice little balls, and is then often pan-fried! From there, some bake them, some freeze them, some toss them into a soup or sauce base and simmer them, etc. This is where variety can continue to play a part. Moroccan meatball and tomato stew, with a side of Eggplant Hash, perhaps? Sure!

Secondly, and as mentioned before, meatballs contain "stuff". I’m a huge fan of meat. I also tend to like stuff, but I often like my stuff sneakily hidden inside meat. Any parent that has pureed spinach or vegetables and added it to a kids hamburger meat knows this trick. It’s a good way to boost one’s nutrient intake! Beyond that, it’s also a great way to add things like extra fat, moisture, flavors and aromatics! You can even change the meat around. It doesn’t need to be “just” beef or “just” turkey. Combine ‘em for different tastes! Or, grind up some of that venison or pheasant trim from a recent hunt, add some stuff and ball ‘em up!

Above and beyond the flavors that can be added, the stuff also adds bulk to the meatballs. One can take a lb. (454 g) of ground meat and mix in raw bacon, ground mushrooms, onions, zucchini, pureed spinach, peppers, grated carrots, tomato paste, garlic, herbs, exotic spices, and more. Much much more!

I recommend an egg per 1/2 lb. of meat. It helps to bind it all. I wouldn’t ever have more stuff than meat, as the balls will just fall apart and disintegrate without starch to hold them together, but you can quickly extend the volume of your meat by adding your various stuff.

Third, meatballs are essentially mini-meatloaf balls. Anyone who has made a meatloaf, or any number of any of a myriad of traditional western style meatballs knows that they’re full of breadcrumbs and/or occasionally rice. These starchy additions perform a few duties: they add inexpensive bulk, they add moisture and they help bind it all together. See, breadcrumbs and rice are full of starch. This starch will swell in a hot wet environment and absorb any moisture that comes into contact with it. This moisture being held by the starch is what keeps meatballs from being dry and crumbly. Also, the starch and gluten, in combination with the eggs help serve as a glue to hold the whole thing together.

Without the starch, it gets a bit tough. I know a lot of people who use pork rinds for this, but I don’t know that this is doing much. At its core, it’s really just more ground meat. It’ll swell as it hydrates and pick up a bit of moisture, but what we really want is something thirsy ... HUNGRY. We want something that picks up moisture and holds it there.

One common hungry ingredient is coconut flour. Coconut flour holds about 4 times its weight in fat and water. However, I’d only use coconut flour in some kind of exotic or tropical meatball (which does sound divine!). For the most part, I typically tilt towards ground chia or flaxseed. THESE two ingredients will swell to about 10 times their size, holding loads of moisture!

If I see a good sale on ground meat, it’s not uncommon for me to grab a bunch, come home and whip up a batch of meatballs. These, I’ll pan fry, but leave a good medium-rare on the inside. Then, I chill, then vacuum pack them in batches of about 12 balls and freeze for a later day.

The recipe below is a very tasty, but a largely basic and generic western style meatball. It’s intentionally neutral as it allows me to plop a few balls into a far wider variety of dishes. Don’t let its basic nature deter you, though. Whip ‘em up and throw a few into a big creamy tomato-bacon-parmesan soup for lunch. YUM!

Grinding Note: If you have a meat grinder, or plan to grind your own meat, a quick way to chop the mushrooms is to run a coarse grind through the grinder. Follow this up by coarsely grinding your raw bacon, which adds fat, salt and smoky flavor. I wouldn’t recommend this with the other vegetables, though, as it’ll damage them causing rapid oxidation. Graters work well for this (and on the mushrooms, too!)

Photo Note: The photos show the meatballs in and out of vacuum packing. Also, I tossed them in a quick homemade tomato sauce and some fresh basil and plopped it on top of some squaghetti that I’d warmed up from the freezer. Some grated parmesan from CostCo and I’m good to go!
Prep Time20 mins
Cook Time15 mins
Total Time40 mins
Servings: 12 Servings
Calories: 361.135kcal
Author: DJ Foodie