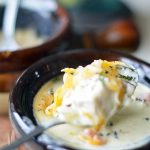 I wanted to show a fun way to freeze a soup base for a 2-part series on batch cooking and freezing recipes. Chowder seemed like a fun one, as I can create a rich and flavorful base, freeze it, then reheat it and add cream and any other last-minute additions I’d like to add at a later date. It’s an efficient way to get an amazing homemade chowder, in mere minutes!

To me a chowder is typically a thick and chunky soup, almost always cream based (Manhattan Chowder, notwithstanding). It’s usually made with seafood, but not always. It also often has potatoes or corn, but not always. It’s also very often thickened beyond what the original ingredients will create, usually with starchy wheat flour through a roux, crackers or biscuits.

With this recipe, I’m going to focus on two key aspects. 1. The batch cooking/freezer approach to preparing such a thing and 2. Thickening.

Because cream (even homogenized cream) can break resulting in a kind of scrambled oil slick, it’s best not to freeze it. The water molecules will expand and freeze into slightly larger crystals, breaking out of its emulsified state. When the water crystals melt, they leave behind the fat and some tiny lightly coagulated curds. However, the rest of the ingredients in a soup or stew base freezes quite well! So, it makes sense to create a strong-tasting soup base, without a lot of liquid, but tons of flavor. When this base is defrosted it is reheated with fresh cream, diluting the original potent flavors, ultimately balancing into a rich bacon cream with loads of chunky vegetables and substantial cubes of luscious chicken.

Cream isn’t always all that thick all by itself. It CAN be thickened through reduction, which is how I arrive at a thicker chowder in another chowder recipe. However, if one doesn’t have the time or inclination to go this route, but they still want a big thick comforting bowl of chowder, they’ll need to thicken it, somehow. Flour will obviously work, but I personally try and avoid carbs and grains. That makes it tough when grain based starches make for such great thickeners!

I’m going to use a combination of two different thickeners to do this. Please keep in mind that this is strictly optional. It’s purely for mouth-feel. These thickeners won’t impact the taste at all. I get asked about thickening enough that I felt I should write about my personal favorite method: xanthan gum (or glucomannan powder) and tapioca flour.

Xanthan gum is a zero-carb thickener. A little goes a long way. And, while it’s a good thickener, too much of it goes from a nice viscous mouth-feel to obvious slime. It becomes unpleasant. While the little bit of thickening from the xanthan (or glucomannan powder, which is very similar, in this regard) is a nice touch, it doesn’t bring the chowder up to the full thickening power of something like you’d find in a warm bowl of winter chowder. To get that little bit of a pleasant extension, you can use a little bit of tapioca flour or arrowroot. Combine the two with a little bit of salt, pepper and maybe a twinge of powdered sweetener, like Swerve, and QUICKLY whisk into your warm liquid. Start with a little bit, whisk it in and wait a minute to see the thickening power. Add a bit more if you need to. Keep in mind you can always add more, but once it’s in there, you can remove it. Tread lightly and add as you need.