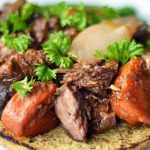 This recipe is part of a series on batch cooking. It is a spectacular example of the kind of food that is easy to cook in large amounts, freezes well and is largely a self-contained meal. It’s got all the fats and proteins one needs, as well as loads of veggies, too. This is a nutrient rich dish!

Can I just say that it was OUTSTANDING, too!!?

When I cook, I’m always confident the end result will be delicious. I’m not always as confident in the appearance, but I’m always certain it’ll at least be tasty. However, I never know HOW tasty. Some of the time things are quality, but just ok. It'll be a blend or combination of flavors that are pleasant and enjoyable, but otherwise forgettable.

I’m a big fan of Pixar movies. I have the confidence in them to make a quality flick. However, some of the time they make Cars 2 and others... they make Finding Nemo. THIS is a Finding Nemo caliber recipe!

When I vacuum pack anything in batch, it typically bumps and bumbles around my freezer until a bag winds up in the fridge, where it continues to shuffle around until I ultimately reheat it and enjoy it weeks or months later. It’s pretty rare that I actually dream about pulling certain things out of the freezer over others. It’s all good stuff, so there’s never much of a downside, but... the Beef Bourginon did NOT last long. I made a huge batch, too!

Above and beyond the sheer quality of the flavor and efficiency of such a recipe in my life, it also takes my right back to cooking school. Much as Remy’s Ratatouille instantly transported Anton Ego to his childhood, the big beefy and red winey-ness of this classic recipe took me back to dinnertime in Farquharson Hall at the CIA.

This recipe is a classic. Beyond a classic. I’m not reinventing the wheel here. However, I am, hopefully, turning a few of you on to a recipe that has roots reaching back over a thousand years. Like the similar Coq au Vin, this is a recipe stemming from a specific area of France, intended to stew tough cuts of meat and make them palatable. It’s a mixture of common ingredients from that specific place, tossed into a cauldron and simmered until outrageous!

I don’t know that higher praise for a recipe can be given than the following...