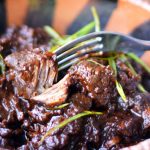 See, I have a particular hang-up that either holds me back, oooor it forces me to be creative. I’m never really quite sure which it is. I struggle to make authentic regional foods, from regions outside my own. People get upset with me when I stake this claim, but I can’t help it. It’s just something I feel deep in my bones.

I used to own a catering company down in Mexico. The menu had a very wide range of foods, ingredients and cultural nods. Yes, Mexico presented strongly, but I didn’t have anything simple like Shrimp Tacos. I didn’t have anything like Cochinita Pibil. I DID have things like Chilled Shrimp Ceviche with Cilantro Salad in a Jicama Shell and Sour-Orange and Achiote Smoked Pork Tortas, though (both were stunning!). Neither were authentic, but both strongly resembled food from the area (in a hoity-toity sense). Every once in a while, I’d have someone call and just ask for Tacos or Enchiladas. In the most awkward way possible, I’d sheepishly explain that I don’t really know how to make those things, that I’m not originally from Mexico. It’s not in my blood. I can approximate those things, but for the real deal, it may be better to find an authentic local.

A person that comes from a specific area knows that area. They know the foods they were raised on. They know what they’re eating in their home. They know what their neighbors are eating. They know the best restaurants, the best street food, their grandmothers’ favorite dish, etc. They know the ingredients in their house and the brand names their local market carries. Authentic foods, to me, are made by those people, from their own cultures, using ingredients procured from the area in which they’re intertwined. It’s like a Cuban fella trying to make San Francisco Sour Dough ... in Miami. It’ll be good and potentially even excellent, but it won’t be authentic. Even if he has a 100-year-old historic starter from San Francisco, a few Miami yeast spores are likely to hop in for the ride.

I’ve done a lot of reading and research on the topic of chili, chilli, chile, chilly, etc. The more I read and the more I learn, the less crystal the idea of a perfect authentic Texas style chili becomes. If there’s anything that is true, that I believe I can firmly stick a pin in, it’s that it involves a lot of meat and a lot of chilies. Almost certainly, there are no beans and no tomatoes. Beyond that, the fog rolls in quickly.

The best I’m really able to do is to imagine the history of chili in Texas and try and pull together the ingredients and method from that. Roughly 150 years ago, Chili was made from nourishing stuff found in the San Antonio area. It was largely inexpensive and readily available ingredients, tossed into a cauldron and melded over time. The famous Bowls o’ Red.

There’s also a separate type of on the range chili, which was dried meat that was pounded into a kind of stringy fluff (like Mexico’s tasty Machaca). From there, fat was pounded into the meat, along with some chilies and seasonings. This was formed into bricks. Cowpokes, cattle prodders and cookies carried this flavorful nutrient dense foodstuff around with them, completely preserved. They’d just add a little water and maybe a bit of flour to thicken it and emulsify the fat ... and enjoy!

The meat wasn't always beef. It was often pork, venison, turkey, antelope, or whatever else is around. Blends weren't uncommon. The chilies also weren't always the same and were often blended. However, the super spicy Texas chiltepin often made an appearance. Chilies were added in an effort to bulk out the meat, to feed a full family. There were almost as many chilies are there was meat. There was typically wild onions and garlic; probably oregano and cumin, too! Plus, salt. Maybe thicken with wheat or corn flour. Cook until amazing.

Near as I can tell, the previous short paragraph is as authentic and clear a Texas Chili recipe as I can find. Take what you can find within those guidelines, and cook until wonderful. Simple!

I am currently visiting Mexico. I went to the local grocery store to see what kind of chilies I could find. I don’t know that I could find a chiltepin if I tried, but I wanted to see what’s what.

Here’s what I found:

IMHO, the end result isn’t a truly authentic San Antonio Bowl o’ Red, but it’s made with a lot of the same ingredients and done in the right spirit. I had a Mexican friend over, when I made this. I was beaming when it was done. I was over the moon, in fact! It was a thick, rich and full-flavored meat mélange, with a touch of spice, but nothing alarming. It was very dark with massive tender chunks of beef. I put a delicate and supple beef chunk on a plate for her to sample. She loved it. “Mole!”, she declared!

Whatever you want to call it ... it was perfect.