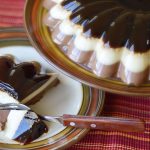 In a world without sugar and flour, including the fruit sugars that come about when using real fruits, an interesting array of sweet treats often seems challenging and difficult. While it’s fun to come up with ways to build a dessert around a small amount of actual fruit, or even use artificial flavors, there are a few ingredients which are quite common as a sweet and don’t lend much to the bottom line: vanilla, chocolate, coffee, and nuts.

Here, I’ve combined all 4 into a single layered treat!

This has a layer made from extraordinarily strong coffee, a vanilla cream layer, a silky chocolate layer, and finally a chocolate almond cake, to lend some texture to an otherwise thoroughly soft and jiggly dessert.

While this recipe is attractive, sweet and well balanced, it has a few hidden lessons lurking within its wobbly walls. There are two oversights I made when making this. While I could’ve remade this cake, or pretended that I didn’t boo-boo, I tend to believe people learn more from their mistakes than their victories. In this case, you all get to learn from mine!

Each of the top layers are a flavored gelatin. I create a liquid layer, then chill for about 8 hours. Then, a new liquid layer, following by another 8 hours stretch of chilling and solidifying. This is done 3 times, with a cake being released to float on the final layer, as it chills.

Anything that is whipped will ultimately make a few bubbles. Something like a whipped and gelatinized cream can actually be a lovely thing, along the lines of a supple ambrosia. However, unplanned gelatin bubbles can present a problem. The first layer in my treat was a gelatinized coffee. When I whisked and poured it into my mold, the surface had a thin layer of coffee bubbles. I didn’t think much of it, assuming the bubbles would all quickly pop. I placed my mold in the fridge to cool and went about my day. Several hours later, I checked in on it and saw a consistent layer of gelatinized coffee froth all along the top of my first layer. “Drat! Well... it’ll taste good and no one will see it. It’ll be hidden by the vanilla cream”, I rationalized.

So, I set about creating the gelatinized vanilla cream. I brought my warm base down to room temperature, then poured it into the mold, concealing the coffee layer (or so I thought).

The next morning, I went to bake my chocolate cake layer. Before I began mixing my batter, I measured my cake pan and my gelatin mold. My cake pan is a standard 9-inch (22.5 cm) cake page. My gelatin mold has a 10-inch diameter (25 cm). This suggests a cake base of 9-inches should easily fit. In fact, it should leave a bit of jiggle room! However, I made an assumption. I noticed that the edges of my mold are fluted. This suggest that my inner diameter is less than 10-inches. "But, there’s still room!", I assumed.

Here’s where my big mistake occurred. Not only were the edges fluted, but the edges also quickly tapered in at a strong angle, meaning the diameter at about 1-inch (2.5 cm) in depth is about 8-inches (20 cm). Furthermore, the dips of the flute don’t reach the same elevation as the creases between flutes, suggesting I can’t even fill it to the top without some overflow. These final two details were observed, but overlooked and ignored.

I made my chocolate pudding base, allowed it to cool, then poured it on the vanilla layer. Alas, not all of it fit. Some of it oozed over the edge through the dips, between flutes. I still needed to slip my cake in there, too!

I laid my cake on top of the pudding, but the inner edges of the metal mold obstructed my ability to lay it flat. Instead, the outer edges floated above the pudding, while the center of the cave dipped and concaved into the chocolate, like an overturned frisbee. This pushed bit more chocolate ooze up and through the flutes. “DURNIT!”

Knowing that none of this is a barrier to flavor, and having come this far, I had no choice but to chill it down and hope for the best.

The next morning, I pulled it from the fridge, warmed the mold in a hot water bath and flipped it onto a plate. “UGH!”

Here’s where my two foibles became instantly clear. The frothy coffee separating the coffee and vanilla cream layers mixed, creating an inconsistently blotchy line, looking almost exactly like a scar surrounding the entire dessert. Additionally, the weight of the gelatinized treat pushed down on the center of the concaved cake, flattening it, diminishing the voluptuous bulbous top. My round mound has lost some mound. “Mehhhh...”

I warmed up a knife and sliced through it. I put a slice on the cake and saw the layers all steeply pointing towards the center. Looks like I completely forgot my level!

Learn from my mistakes, my friends! If I had scraped those bubbles off and used a larger mold, or baked a cake with a smaller diameter... it would’ve been PERFECT to bring to a potluck!

Instead, I just sat with a long-handled spoon and enjoyed it, all sad and alone, pouting during an old episode of Parks and Rec. Gotta love that Ron Swanson!

Coffee Note: In order to make the coffee strong enough for the taste to balance within this dessert, I boiled 1 1/2 cups (360 mL) hot water and added 10 Starbucks VIA packs. This suggests each slice contains 1 cup of Starbucks VIA coffee.