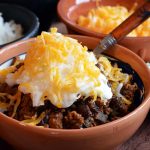 I grew up in the mountains, outside of Yosemite National Park, in California. The town I grew up in didn’t have a central government. So, there was no one paying attention to the growth or aesthetic of the town. It was a mishmash of whatever people fancied, as they fancied it.

I DO recall one single organized neighborhood in the area called “Yosemite Lakes Park”. I had a few friends that lived there. The center of the action was the neighborhood swimming pool. The diving board had incredibly scary looking bite marks on the corner. The Frito Chili Boats were the tops. It was a bag of Frito’s split along the side. Some kind of chili-like substance was ladled in, sour cream was squirted, and grated cheese was dribbled over the top. It always burned my hands to hold, it was terrifically messy, and was awfully even horrendously wonderful. A truly delightful hot mess!

This Chili is my interpretation of a very basic, very tasty, very homogenized Chili. It’s not traditional, it’s not delicate and it breaks many of the rules of a true Texas chili. It has beans, it has tomatoes and when I invited friends to nosh on the Chili piled into their bowls, they absolutely grimaced at the sour cream, but I’m here to tell you ... it went down hot and smooth!

It was everything the Chili in my Chili Boat wanted to be, but simply wasn’t. That was some kind of gruel shlorped out of a heavy #10 can, while this was made from grass fed ground beef and locally grown chilies and tomatoes. That had the texture of severely overcooked and pasteurized ground “something”, this has actual meat in it. It has a variety of interesting flavors and a touch of crunch from the poblano peppers. I confess that I went the extra mile and added some organic black soy beans to fully bring this Chili home.

Keep in mind that the soy beans are optional and do little more than add bulk and some textural variety to the simmered meat. In today’s nutrition circles, soy is a controversial ingredient. Just as much as I know others will scoff at such an exotic ingredient, but I’m going to go out on a limb and say ... they’re delicious. A few organic (non-GMO) soy beans to have a bean chili is worth the risk and indulgence. It’s not much and it’s not often. And, hey ... at 16 carbs and 14 grams fiber, it’s only 2 net carbs per cup and a nice little boost of fiber.

Note: I feel I should say something about the chili “sauce”. See, a normal bean chili will absorb a lot of the water into the beans. They will swell. Some of the starch from the beans will escape into the chili, thickening the sauce. While this chili may have beans, these beans have no starch. This means that the sauce may be a bit on the watery side. Or, if you’re like me, you’ll remove the lid earlier in the process and allow A LOT of the water to evaporate. This will create a much thicker chili, with very little “sauce” to pool at the bottom of the bowl.

Freezer Note: I make triple batches of this, chill it, portion it and freeze little buckets of it. It freezes and reheats PERFECTLY!