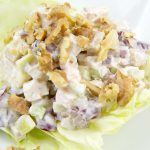 A Swiss fella named Oscar came up with the recipe at the Waldorf Hotel in New York, somewhere in the mid 1890's. This means it's about 120 years old and a true American classic! Oscar wasn't a chef, though. He was a maître d' and later the maître d'hôtel of the Waldorf Hotel, when it opened in 1893. There are some the believe Oscar contributed his idea to the opening festivities of the Waldorf (later the Waldorf-Astoria) in 1893, but ... no clear proof has survived the ages. In 1896, Oscar wrote a cookbook simply called "The Cook Book", containing the famed Waldorf Salad. The entirety of that recipe was, "Peel two raw apples and cut them into small pieces, say about half an inch square, also cut some celery the same way, and mix it with the apple. Be very careful not to let any seeds of the apples be mixed with it. The salad must be dressed with a good mayonnaise."

(On a personal note, it's interesting to see how much the concept of a recipe has evolved in 120 years!)

Over the course of a century, plus ... the salad has changed shape, ingredients and flavors, sometimes containing meats and poultry, other times with or out without fruits, or with the addition of other fruits. Nuts are a common addition, as are some spices, such as cayenne or paprika. The dressing is also not always mayonnaise, often taking the form of something more akin to a coleslaw dressing, or even just a simple yoghurt. If there is anything that has stayed true to the recipe, through most every iteration I've seen ... it's the apple and celery.

Because of the high concentration of sugar in apples, I've reduced the apples and added chilled and cubed chicken, to add both bulk and protein ... for a full meal, perfect for a sack lunch! I've also added a few quartered purple grapes, for some color contrast and a bit more sweet. Finally, I've added some sweetener to the mayo, in order to bring back some of the sweet sensation which has been lost by the reduction of fruits. Finally, I've maintained the walnut, for both taste, as well as nice crunchy texture. Finally, the whole thing is plopped onto a few lettuce leaves, because apparently this is a common way to go. A sweet, crunchy and thoroughly filling salad. A perfect way to experience lunch on alternate Tuesdays!