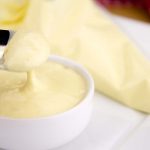 I LOVE pastry cream! This is the magical pudding like custard you'll find inside a cream filled doughnut, éclair, cream puff, pastry tart, cream horn, or a nice full Boston Cream Pie! One of my absolute favorite desserts is one called Mille Feuille (pronounced something like "Me Fwee", it means "thousand leaves"), which is alternating puff pastry and crème pâtissière, which is then frosted usually with some kind of fun berry or chocolate design. I tried to make this for years, always running into issues of consistency. It would be too thin, or it would turn "chunky" or it would simply be a custard. I had to reach outside of typical low-primal ingredients into something occasionally found in the Paleo landscape to achieve the desired consistency. The tapioca flour slightly boosts the carb counts, but ... in return, I get pastry cream! Hello true Trifles!

Second Note: Resulting in a total of about 4 1/2 cups (1 L), I readily admit that this recipe is quite large. The primary reason for its size is the small amount of glucomannan, in relation to its strength. The glucomannan is a powerful thickener, but it takes on some bizarre qualities in too high a concentration. If I were to write this recipe as a much smaller recipe, then it would ask for 1/4 tsp of glucomannan, which really dramatically decreases the margin for error. My suggestion is to have a plan for lots of pastry cream for the first try. Be prepared to make a super huge trifle or 2 Boston Cream Pies, with hungry mouths nearby. Once you see how it works, then tweak the recipe the second time and cut it into thirds, resulting in only about 1 1/2 cups (360 mL), or about six 1/4-cup (60 mL) servings.

Third Note: The texture is thick, like an American style pudding, but it still somewhat "pools". For a slightly thicker mixture, that holds up as a filling in something like a cake, add 1 to 2 more tbsp of tapioca flour.

Fourth Note: Another trick to create a lighter, thicker cream that can also be "piped" and hold its form is to fold in whipped cream. This will thicken and aerate the pastry cream.
Prep Time1 min
Cook Time15 mins
Total Time16 mins
Servings: 18 Servings
Calories: 105.10111111111kcal
Author: DJ Foodie