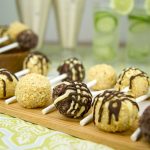 I was sent this recipe from a woman asking me if I could low-carb it for her. I said, "Sure! Where did it come from?" and she said it came from a Toronto Chef with a show on the CBC called "In the Kitchen with Stefano Faita"!

As a general rule, I like to either completely make up a recipe, or use another recipe as a source of inspiration, but twist it and tinker with it, so that it's quite a bit different than the original idea. It's pretty rare for me to straight up take a recipe and leave it as is, but ... this particular recipe needs no tinkering, my friends. The flavor is an above and beyond blend of sweet and salty. The texture is like biting through a wad of frozen cookie dough, mixed with fudge and rainbows. It is, in fact ... PERFECT!

The ONLY change I made to the original recipe was to swap confectioners' sugar with a powdered erythritol blend. Aside from that, I went just short of 2 cups on it, because 2 or 3 full cups of sweetener just felt sickeningly sweet to me. I also added a full 1/2 tsp of salt, because ... I like a salty peanut butter!

Beyond that, I crushed some cacao nibs by giving them a quick half pulse in my coffee grinder and using them to coat a few of the little spheres. You'll notice half are coated with crushed cacao (I didn't like these as much as I'd hoped) and the other half with toasted and crushed peanuts (YUM!).

Finally, I used melted ChocoPerfection's Dark Chocolate Bars as the chocolate. For the white chocolate? Well ... that's a different kettle of fish! I'll list the method below, but I should say that ... I didn't much care for it. I ate it and it was delicious, but the chocolate separated. I've tried it a few times since, and it's always separated on me. If you're quick about it and get it immediately chilled, the cocao butter solidifies white and conceals the fact that it's been separated, but ... it's separated. I know it and it bugs me. It's just not a nice and smooth white chocolate.

My suggestion? If you're asking me, personally? Just skip the chocolate and cacao altogether. Dust them with toasted peanuts. Then, tell no one you've made them and hoard them all to myself yourself!

This particular recipe is fantastic as a fat bomb and as a quick cure for a sweet craving. It's also easily portioned and lives seemingly forever in the freezer. These can be whipped up, shaped, dredged in peanuts and tossed in the freezer in mere minutes ... and can be enjoyed, at leisurely intervals, without worry that they'll go bad or melt.

Honestly, the ONLY problem with this recipe is ... well ... at least in my case ... these decadent little peanut butter balls somehow learned my name ... and would occasionally call out for me.

I would respond, appropriately. Don't tell anyone.