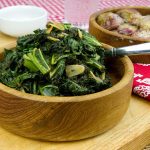 Kale is one of those ingredients touted as a super food. This purple of green leafy vegetable is related to broccoli, cauliflower and Brussels sprouts. Kale has sprung onto the health world scene due to its enormous nutrient density. It's like ... concentrated food! SO much good stuff in those crisp sweet leaves! It's also incredibly versatile, pretty and ... pretty much grows everywhere!

There's a strange aspect to Kale, though. It's sweet! It's actually got quite a high carb content to it. Just 4 ounces of it has over 8 net carbs! To a follower of Paleo or Primal trends, this is not an issue, but for those really counting every last little carb ... 8 carbs for a decent sized pile of greens is a hefty portion of the day's allotment!

In the end, I feel that the benefits of Kale far outweigh the one minor drawback. I can't imagine someone experiencing any kind of negative response to "Kale". It's unfathomable to me to think that someone ate "too much kale". After a good deal of thought and consideration, I decided to add a kale recipe to my site and ... keep it simple.

In this case, this is the kind of thing I'd have at a BBQ. I'd cook it in bacon fat, with LOTS of garlic, and I'd spill some BBQ sauce into it, just to give it a little extra liquid to braise in, while also taking that "smoky" flavor just a tad further. Feel free to use my own BBQ sauce, or one of many sugar free BBQ's sauces out there. I'm a big fan of Guy's BBQ Sauce ... and really think it's tasty stuff!