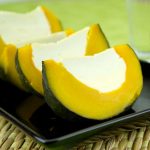 Here's a sort of interesting one. A while back, I assembled a "Thai" week, with some interesting little recipes. In the midst of all that, I stumbled across a vegetable commonly known as the Kabocha Squash. A little more research turned up a common Thai dessert, which just looked AMAZING to me!

Now, before you give up on this one ... it's ACTUALLY really quite easy to do, serves several people and has an UNBELIEVABLY taste and texture. Give it a shot. You will not be sorry. I promise you!

Ahem ... as anyone who has hung out here for long knows, I'm a lover of pumpkins. Really ... all squash, to be honest: butternut, acorn, pumpkin, delicata, spaghetti and ... the kabocha! This Cambodian squash is much lower in carbs than most, but ... appears to pack in just as much flavor as its cousins. With an edible rind and growing popularity, this squash is worth the hunt. I can find them year round at various Asian markets in the Seattle area. They can also be found in the winter-time, at many farmers' markets. While somewhat obscure, they are ABSOLUTELY worth tracking down!

Essentially, the top of the squash is popped, the seeds are scooped out and then the cavity is filled with a sweetened coconut-egg mixture. Then, the whole thing is steamed in a steamer. Then, it's split into wedges and served!

If you could see me typing as I write this ... I'm making yummy sounds and smacking my lips as I type. I REALLY get into my work, some of the time!

So ... here's where this unusual dessert recipe becomes ... a slightly bigger challenge. I don't know about you, but I don't have a giant steamer lying around. If you do ... GREAT! You're MUCH further ahead than I am! I don't have one ... so I had to improvise. I kind of wish I'd taken a photo of this, but ... it didn't occur to me, at the time. It's the same thing I did with the Pork Tamales. I have a large, deep, wide pot. I put water into it and brought it to a boil. Then, I have a metal colander. I placed this into the pot. The metal handles hold it suspended at the top of the pot. Then, I put the pumpkin into it and covered the whole thing with foil. Poke about 3 holes in it ... STEAMER!

Oven Note: Apparently this can be done in an oven, as well. I steamed it, but you can fill it and bake it at 350 F for about an hour to an hour and a half. When the center of the custard starts to rise, it's done. Remove it and let it cool for a good hour before slicing. Good chilled, as well.

Nutrition Note: Kabocha info is based off of 4 cups of kabocha cubes, for 2/3rds cup per person. Nutrition info is not in USDA database. It is an educated guess, but one which is close and honorably presented.
Prep Time15 mins
Cook Time1 hr 15 mins
Total Time2 hrs 30 mins
Servings: 6 Servings
Calories: 170.95666666667kcal
Author: DJ Foodie