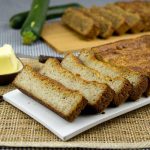 Yep! I'm doin' it! And ... I'm doing it WELL, too! THIS banana bread was nothing short of spectacular! It was beyond moist ... almost "creamy" in texture. Like it's distant cousin, the Zucchini Bread, it was also almost not entirely unlike a banana pudding, but ... a baked one ... shaped like banana bread! IT WAS FANTASTIC!!!

See, the thing is ... bananas aren't evil. They're high in potassium, they're TRULY yummy and ... they even come in their own unique little packages. An almost perfect food! The issue comes in, in that they ARE quite high in sugar, while also being quite high glycemic. A perfect-ish food, but ... also one to quickly mess with blood sugars. HOWEVER! When selecting a banana, select one that's still a bit green. I know that banana bread is a GREAT use for those soft black bananas, that have almost turned to candy, but ... we're trying to get the banana flavor before a lot of that sugar develops. Using them a bit on the green side will help. Also combined with other ingredients, the sugary banana-ness of it is diluted. I personally add a bit of banana extract to it, as I find that helps carry over some of the stronger tastes and aromas. However, I also find that banana oils, emulsions and extracts have a sharp flavor if used too much. I included it in the recipe, but ... recognize that it's TOTALLY optional.

In the end, by using a bit less than an ordinary banana bread, using green bananas and then stretching the flavor with emuslsions, extracts or oils ... well ... you'll get something just as good as the real thing! (It's been years since I've had the real thing, but ... Scout's Honor ... I thought this was even BETTER than any I'd ever had before.) TRULY delicious!
Prep Time10 mins
Cook Time45 mins
Total Time55 mins
Servings: 10 Servings
Calories: 302.265kcal
Author: DJ Foodie