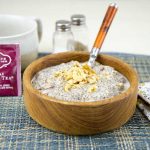 I love chia seeds. That's it! I have little else left to say. They're awesome! I resisted trying them ... for YEARS! ... Sometimes being a stubborn human works against me. I admit it. (don't tell anyone, though!)

This stuff continues to prove its value to me. I recently ground some up and used it as a flour substitute. IT WAS AWESOME!

So ... here we have a Chai seed based Warm Morning "Oatmeal" approximation. It's full-on yum, too!

This stuff is SOOO much like an oatmeal, you won't believe your taste buds! Normally, a chia pudding is along the lines of ... well ... a "pudding". There's just an oat-iness that seems to be missing. There are also some textural issues. My remedy to this is to add some nut meal to the chia, as it absorbs the moisture. This helps the texture. Then, I ALSO tend to add some toasted nuts to it, to further bring the texture along. Then, to give it that morning oatmeal flavor ... I add some cinnamon and nutmeg. The warmth from the milk just ties it all together into a super simple and comforting breakfast delight!

Some notes: Using white chia seeds tends to give it more of an oatmeal appearance; as does a bit of actual dairy. So, a skosh of cream is a nice touch! I also use some sugar-free pancake syrup to drive that morning vibe just a bit further. For those that want to go a bit more natural, here's a xylitol pancake syrup option. Finally, I'm a big fan of the defrost mode on my microwave. It's more of a mellow nuke. If my fauxtmeal cools down too much, I just stick it into the defrost mode of my nuker and tell it that it's a 1/4 lb piece of meat. Sounds silly, but ... it's perfect! Finally, if you're someone that must have raisins with your fauxtmeal ... chop a few up and throw 'em in there. Just ... not too many!
Prep Time2 mins
Cook Time2 mins
Total Time20 mins
Servings: 1 Servings
Calories: 474.64kcal
Author: DJ Foodie