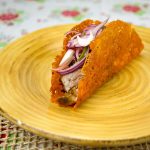 I have a weird fascination with Cochinita Pibil (Buried Baby Pig). This is a near ancient dish, harking from the Mayan people in the Yucatan peninsula of Mexico. If you've never had it, stop what you're doing, start making some calls and track down the ingredients. There are only two truly odd ones (achiote paste and banana leaves), with only one being an absolute must (the achiote).

If I had to compare it to something, it most closely resembles BBQ Pork from the Eastern part of North Carolina. It's a somewhat spicy and tart flavor. Recipes vary, but it's usually a shredded pork, with sour orange, and achiote pasta (a paste made from the annatto seed). It's easily one of my favorite things on this planet.

Pork was introduced to the Mayans by the Spaniards, hundreds of years ago. They Mayans would take whole baby pigs, marinate them in indigenous herbs, spices, citrus and achiote for a night or a day. Then, they would make a fire at the bottom of a pit, wrap the pork in banana leaves, then bury the whole package underground where it would slowly cook, as the acid from the citrus continued to break down the tough meat.

Seeing as I've lived about 25% of my life in Mexico, I like to be culturally sensitive, as often as possible. This mind blowing and historic Mexican recipe can only be described as "El Yummo!" ;)

Note: We're going to substitute a crock pot for a hole in the ground. We're also going to substitute a pork shoulder (Boston Butt) for a suckling pig. Finally, if you cannot find banana leaves (often found in both Latin and/or Asian markets), you can go without, but the achiote paste is a must!