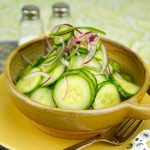 Several months ago, I wrote a recipe for Thai Fish Cakes, which turned out to be surprisingly popular! There are times when I'm fairly sure I know a recipe will do well and times I feel a recipe will not be very popular, but... still loved by a small select few. I expected the Fish Cakes to be the latter. However, when I posted it, it soared across Facebook, apparently landing in front of Mark Sisson who decided to share it on his blog! That day was the most traffic I had on my website, in the first year. WHOO HOO!

At the base of that recipe was a small little note suggesting that people serve this with a Thai Cucumber Salad, followed by brief instructions. Interestingly, I received a few comments on that note, with people actually trying it and suggesting it was, indeed, a perfect pairing! Here's where my old age shows and I have some fuzzy recall... At the time, I remembered getting an email, or a Facebook comment, or... a comment on Pinterest or... SOMETHING. The person appeared to be doing back flips over the cucumber salad idea at the base of the fish cakes. When I read that, I made a mental note to bring forth a full recipe.

Here is that recipe!