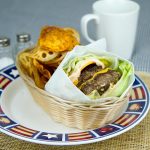 There are those of you reading this that ... are in the know. You KNOW what a "Double-Double" is. You've heard the term "Animal Style" and you know what it means to be served "Protein Style". If you're you, and you're in the know ... chances are ... you're grinning, right now.

To those scratching your noggins, there is a restaurant chain based out of Southern California, called "In-N-Out Burger". There are near 300 of them scattered around California, Arizona, Nevada, Utah and Texas ... with most being in California. It's little more than a burger joint starting as California's first drive-through in 1948, but ... it has grown and it's got a somewhat fanatical (dare I say "cult-like"?) following! As a kid, I remember ALWAYS wanting an In-N-Out Burger, whenever we'd go near Southern California. The burgers aren't particularly mind blowing, but they ARE very good, ESPECIALLY for a fast food burger. It's a clean and happy burger, served from a well treated staff. Their mission, unchanged in 65 years, "Give customers the freshest, highest quality foods you can buy and provide them with friendly service in a sparkling clean environment."

Chefs even love the place! Julia Child was fan and could name ALL the locations between Santa Barbara and San Francisco. Gordon Ramsay? Thomas Keller? Tony Bourdain? Mario Batali? All fans!

To walk into one, you would immediately note the sparking clean and very white interior, with clean white uniforms, red aprons and paper hats. Look up and see a clean uncluttered menu, with barely more than 3 hamburger varieties, French fries, soda and 3 tasty milkshake varieties. Simple. Those "outside the know" ... order a burger and fries and enjoy it for what it is ... They MIGHT notice that their cup reads, "John 3:16" or that their burger wrapper reads, "Revelation 3:20" ... reflections of the Christian beliefs of the family that founded and runs it ... the Snyder family.

Probably the most interesting thing about In-N-Out is ... its secret menu. As stated, the actual menu presented to walk-ins is brief and uncluttered. However, there's a secret lingo that goes into ordering at an In-N-Out, involving terms like "Wish Burger" (bleh), "Four-by-Four", "Animal-Style" and the "Flying Dutchman". A true Atkins die-hard could walk into an In-N-Out burger, straight to the counter and confidently ask for a "Four-by-Four, Flying Dutchman, Animal-Style" and ... LOVE what they get! (four medium-well burgers, fried in onions and mustard, alternated with 4 slices of melted American cheese, and a side of pickles and thousand island dressing ... no bun, no lettuce, just a sloppy pile of glorious goodness)

What we have here is a "Double-Double, Cold Cheese" (two slices of meat, with two slices of American Cheese, unmelted), served "Protein Style" (lettuce replacing the buns) and cooked "Animal Style" (meat is fried in onions and mustard, and served with extra thousand island dressing, and extra pickles), and served with whole grilled onions. YUM!

There is one clear and major flaw with In-N-Outs otherwise sterling reputation and near perfect formula. With all the available secret options (from grilled cheese, to hot chilies) ... each and every one store is strictly BYOB (Bring Your Own Bacon).

"What's That?" Note: The photo is taken with fried lotus root and sweet potatoes, which have been tossed with a bit of salt, pepper and smoked paprika. Pretend they're not there. The crunchy mixture comes in at about 15 net carbs per "small, yet reasonable" serving. As a result, I've opted not to make them their own recipe ... even though they were super awesome! (I know ... I'm mean) :(
Prep Time15 mins
Cook Time10 mins
Total Time25 mins
Servings: 4 Servings
Calories: 706.0625kcal
Author: DJ Foodie