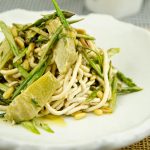 A little while back, I was sent a huge number of links to a video with Rocco DiSpirito on a Rachel Ray show. He'd apparently invented something akin to the cure for cancer or ... time travel. He'd come up with a way to make pasta ... out of chicken! (cue the dramatic music!)

To decode that inquisitive exclamation, people wanted to know if that was possible. Could pasta really be made out of chicken? When I saw the video, I was intrigued! I knew what it was and what was happening, and definitely agreed that it was clever, but ... how would it taste?

First of all, let's take a look at the original video:

What we have here is a chicken emulsion. I'm a big fan of emulsions and use them regularly, as seen in this Crab Cake Recipe, or this Béarnaise Sauce. It's actually not entirely unlike a very long and thin chicken sausage. Imagine a hot dog, but much much thinner, much much longer and without a casing to hold it all together. That is essentially what this "pasta" is! A really really really really long chicken weiner!

At first, I was a bit skeptical. I knew it would work, but often times these kinds of recipes only really work under a series of magical circumstances (like being on a big sound stage in front of a live studio audience). Whatever was in that squirt bottle had been tested and tweaked and tested again. I would've been FAR more impressed had they used the stuff they actually blended onstage. However, there is a recipe on the page, so ... I tried it. IT WORKED!

Take a look at the world's worst YouTube video. I never meant for this video to be recorded, but ... as I was swirling the squirt bottle in spirals, an iPhone was pointed at me ... and the following footage was recorded:

The proof, as they say, is in the weird chicken emulsion. It does work! It makes long strands of noodle-like pasta-y stuff! How does it taste? (cue the dramatic music!)

It kind of tastes like a cross between something related to a chicken sausage, somehow, and ... a Styrofoam cup. Sure, it's long noodles and is a bit deceptive to the eyes, but ... IT AIN'T PASTA. It may look like a pasta and quack like a pasta, but ... it ain't a pasta. However ... it wasn't totally awful, either. I did my best to turn it into something kind of light and springy. The end result was kind of cool! It was an interesting dish, in that these are ingredients that would taste awesome over a chicken scallopini, for example. In fact, that's sort of what it is, except that ... the chicken looks like pasta. In the end, I was quite pleased with it. It looked good and tasted great, but ... the next time I'm craving pasta ... it won't be a craving for this, sad-to-say.

Notey Notes: The little hole in my squirt bottle was a bit too large. A smaller hole would've produced thinner strands, which likely would've given a better mouth feel. Also, there is a reason they were looking for the blender stick in the original video. The stuff is like sticky glue and you need to keep pushing it into the blades to get it silky smooth. I have an old beat up blender I picked up at a garage sale. New, it was probably worth about $5.99. Let's just say that this concoction put my blender to a smokey test. It worked, but my blender was none too thrilled with me! Finally, I recommend drying the noodles on a paper towel before tossing into a sauce. They aren't terribly flavorful. So, any extra water you might be throwing in will only just dilute things further. Finally, I think that adding a small amount of raw bacon (about 1 oz), in place of 1 oz of chicken, will do wonders for this pasta! It will add a bit of fat and give it a bit more salt and character. Plus ... it's BACON!!!
Prep Time20 mins
Cook Time15 mins
Total Time35 mins
Servings: 4 Servings
Calories: 390.5225kcal
Author: DJ Foodie