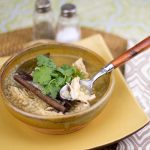 A few months ago, I suggested people let me know if there were any recipes they'd like to see me create for them. I like a good challenge and wanted to see what people had for me. One of the individuals who sent me some inspiration was a woman named "Pauline G." She almost took it as a homework assignment and sent me a LIST of recipes! Oh, and it was quite a list, too! This is the first of them added to my website, but more shall follow. It was no simple task. Pauline really wanted to push me, it would seem! Most of the requests were desserts, but this one is more a ... soupy-stew-mush. I'm not quite sure why I'm posting it, much less first! (actually ... it has to do mostly with the alphabet!)

This is a fairly obscure dish. It's actually a heavily overcooked mushy stew-like porridge, with just enough spice to make it interesting. It seems like it's usually made with lamb or chicken and wheat or barley kernals. It's something like an Armenian comfort food, but I've also seen references to it from Lebanon and other Arabic countries. Warm, soft, inviting and ... comforting. Perfect for a chilly winter day!

I decided to give it a shot with shirataki rice and ... here's where this recipe nose dives into Lala-Land. See, without the starch to really bind this thing together into a comforting mush, it would be shredded chicken in and amongst tiny slippery pearls of glucomannan fiber. Whee!

So, knowing there was nothing in it to really make it STICK to itself, I opted to make it more soup-like. In the end, I really liked it for what it was. It was a flavorful bowl of chicken soup with some interesting spices and little shirataki pellets. It was warm and comforting, but I know it wasn't the homey porridge I was being asked for.

It's good enough as a soup and tasty. Give it a shot for something different. The flavors are excellent! However ... in terms of recreating a low-carb rendition of the dish? I feel I failed ... and I'm sad.