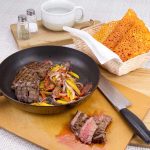 The word "Fajita" (FA-HEE-TAH) is Spanish for, essentially, "little strips" (likely of meat). It's actually not a traditionally "Mexican" dish, per se. It's actually more something that likely occurred near the Mexican border in Texas, around the 1930's.

So, this "Tex-Mex" foodstuff is actually American! I learn something new, every day!

Legend has it that ranches would slaughter an animal to feed the ranch hands. The skirt steak (considered a throwaway item at the time) was often given to the Mexican cowboys as payment. This was usually grilled up at the campsite and served in a tortilla! This tradition went on unnoticed by anyone but the Vaqueros' and anyone close to them. Eventually this tasty tradition could live in the darkness no more and was sold at Texas fairs and festivals in the 60's and 70's. By the 80's skirt steak was no longer a throwaway and was increasing in value. By the 90's, a "Fajita" was big business for places like "El Torito", where it is served on a hot sizzling platter with peppers and onions.

Nowadays, pretty much anything grilled and served with peppers and onions is called "Fajitas". Shrimp, chicken, squid, etc. It's all good!