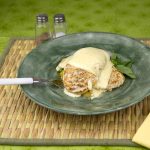 I have a follower on my Facebook page going by the alias of "Mombie Zoprano". I do not know her real name. It remains a mystery. I can only assume she's wanted in connection with all the missing gumball machines in the San Joaquin Valley. In any event, she popped onto my radar when I was added to the cookbook authoring team at Low Carbing Among Friends. She was incredibly complimentary and I have not forgotten her words. Flattery will get you everwhere!

Since then, she occasionally pops onto my Facebook page, or sends me private messages announcing what she's just made herself that evening. She also shares a variety of recipes and things she's considering cooking. Her enthusiastic delivery can only be described as "Sqwee-ing". Always a delight!

One of her ideas was for something along the lines of this here dish. Because the concept originated with a list stemming from Mombie, I've named it after her. Ultimately, it's a Chicken Alfredo with Spaghetti Squash, but... that name undermines the true story behind how this recipe has come to be on my website.