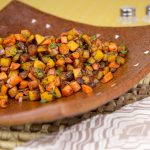 For the longest time, I was afraid of carrots. I'd read that while fairly low in carbs, the carbs that DID exist would blast my blood sugars with near the same rate as pure glucose! As a result, I (and many others) avoid carrots within a low-carb lifestyle.

A few months ago, I read an article stating something to the effect of, "The GI Carrot Myth". The general idea being that the test that resulted in cooked carrots having a Glycemic Index of 90+ was just wrong! Cooked carrots are actually closer to 30 or 40 (lower than a sweet potato), which ... while this isn't NEW information, it's somehow less spectacular than saying that cooked carrots convert to sugar in the blood in a nano-second. The myth has somehow persisted, even in my own mind, until recently.

Around the same time as my discovery of the lower GI of cooked carrots, I also happened upon the Kabocha Squash, another orange fleshed vegetable, with a taste similar to that of a sweet potato. Diced, a cup of this squash is only 6 net carbs per cup. I love a good hash and feel it can form a nice base for many a meal.

Nutrition Note: Kabocha info is based off of 4 cups of kabocha cubes, for 1/2 cup per person. Nutrition info is not in USDA database. It is an educated guess, but one which is close and honorably presented.

Two other great hash recipes (and one mediocre one):