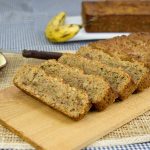 I started working in restaurants at about 14 years old. At first it was just weekends and summers, but when I turned 18, I worked in a big city restaurant, for none other than Wolfgang Puck! At the time (1992), this was HUGE for a little 18 year old punk from the mountains of California. This recipe started its life during those days.

My first big city restaurant job was ... as a baker. Yes, my friends, I was a peddler of flour and sugar ... professionally! Oh, how I've changed my ways! This recipe was handed to me via the head baker in and amongst a tattered booklet of other hand-written baked goods. It was given to me as a breakfast muffin, of which we baked the big kind, with giant booming caps!

Years and years later, I owned a catering company in Mexico. As a promotional tool, I would attend the local farmer's market as a vendor, peddling my flours and sugars, including this recipe, which had some of the fat removed for a lighter texture. It was also baked into a loaf, rather than a muffin. I sold out of my zucchini bread first, almost always!

Here we are again ... years and years later ... this recipe is rearing its head once more! This time, as a low-carb zucchini loaf! I'm going to say something a little strange, but ... trust me when I say I believe it ...

Historically, this would rise and create a very soft and cakey loaf. This loaf, without the gluten to really carry the weight ... somewhat collapsed on itself, but a remarkable thing happened. Perhaps it's the new flour blend, but the texture has almost improved! The taste is just phenomenal! The end result is almost like a baked pudding, in texture. Soft and tender, with a whisper of cakey-ness, and brown crispy edges! I don't really have much of a sweet tooth, but with this thing lying around ... it got eaten ... AND QUICKLY!
Prep Time10 mins
Cook Time40 mins
Total Time1 hr
Servings: 10 Servings
Calories: 213.854kcal
Author: DJ Foodie