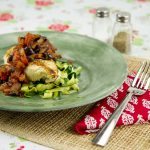 Not all recipes start as a fairy tale (unless, of course, that particular fairy tale is "Pretty Woman"). Some historic or traditional recipes exist out of necessity, be it for speed, available ingredients, perseveration, the masking of rotten flavors, tenderizing, etc.

Pollo alla Puttanesca literally means, "Whore's Style Chicken". It's essentially just chicken with "Sugo alla Puttanesca" (Whoreish Sauce); a sauce draped over the top of it. The sauce is a mixture of tomatoes, olives, capers, anchovies, garlic and chili flakes. If you're a bit squeamish of the anchovies ... bacon bits will do in a pinch!

Over the years, I've heard MANY stories about the origin of the name, ranging from being named for the aroma of Italy's "ladies of the evening" to it being an accumulation of leftovers that would collect, to being something that the prostitutes would quickly assemble between appointments. There are also tales of this being something tossed on the ladies of pleasure as they walked through the night time alleys, shouting "puttana, puttana!"

There are also stories of it being a relatively new recipe, with written examples of it only going back about 50 years! There are those that believe it's a name twisted from the word "puttana", which today means "prostitute" in Italian, but its origin lies in the latin "putus", meaning "boy". From this etymology comes the word "puttanesco", meaning "lower than" ... as in "boyish, girlish, whoreish, etc." It implies a lower status, while not necessarily meaning "prostitute". It could be interpreted, then, that the name simply means a sauce made from humble ingredients.

Preparation Note: This recipe goes quickly, so have everything chopped and ready to go, before you even start heating the pan.