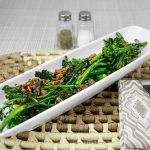 There's a vegetable out there called rapini, broccoli raab and/or broccoletti, which kind of looks like broccoli, but is more closely related to the turnip. It's my understanding that it's quite common in southern Italian cooking. I remember cooking it in culinary school and I've seen it handful of times in various restaurants. I remember a time when I could find it in the grocery store. I never really sought it out, as it's INCREDIBLY bitter, which doesn't really jive too well with my palate. Even cooked down, it's still very bitter. It's edible and fine, but ... far from my favorite. HOWEVER! In reading about it, I realized it's an almost totally "free food" for a low-carb lifestyle. In fact, really, any diet, anywhere, is going to say, "You can eat as much rapini as you can stomach". Even the famous Jack Lalanne was quoted as saying, "If it tastes good, spit it out!". I went on the prowl to track down some broccoli raab, with the plan to make something yummy and plentiful. Alas, I could not find it!

Everywhere I looked ... it wasn't there!

In place of where I feel rapini USED to be, was a new vegetable. This is one I've never really seen before. They must have invented it, while I was tanning down in Mexico for near 10 years. Upon my return, imagine my surprise to learn of a whole new vegetable! This one is being called "Baby Broccoli" or "Broccolini". It looks VERY similar to rapini, but it isn't rapini. It also isn't baby broccoli! Not really, anyway ... it's a cross between a Chinese vegetable called "gai-lan" and regular ol' broccoli. It's stalk is longer, totally edible, with smaller florets and the whole thing is just a bit sweeter. It looks like it's really becoming quite popular. Even the Jolly Green Giant is making a play!

So, feeling a bit dejected, I grabbed a package of fresh Broccolini and headed home. I wanted to make something simple, but tasty. That usually involves bacon. But, I wanted to take it one step further ... GARLIC!

So, I made my little garlic chips, added some bacon, then sautéed the raw broccolini in the sweet and salty crunchy blend of ingredients. Added a little salt and pepper ... BEST BOWL OF BABY BROCCOLI EVER! You'll notice that I've sort of adopted it as a new base for many ... MANY of my recipes. I LOVE IT, SO!

Unfortunately, it doesn't have quite the same carb profile as rapini. It's closer to regular broccoli, from a nutritional standpoint. So, you can eat a big bowl of it, but ... if you're me ... probably not two!
Prep Time5 mins
Cook Time35 mins
Total Time40 mins
Servings: 4 Servings
Calories: 165.1925kcal
Author: DJ Foodie