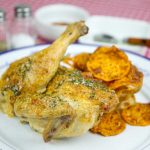 This chicken recipe involves a process called "Spatchcocking" or "Spattlecocking"; a process where the backbone of a whole chicken is removed and the bird is flattened and cooked. It's basically butterflying the entire bird. While I realize that "spatchcock" is a strange word, it's traditionally the word used for a young chicken in England (much like the French called them "poussins"). The technique and bird name have fused over the years, giving us the spatchcock technique.

Spatchcocking a bird is a great way to go, for a few reasons:
I highly suggest watching at least one of the following two videos. Both show how to spatchcock a chicken, but each are a little different. I also feel both leave out an important piece, but we'll get to that.

Bamaquer Spatchcock Video: including removing the keel bone and splitting the bird completely in half. This can be a smart move, but not required.

Hilah Spatchcock Video: she gives a great pitch for spatchcocking in a high quality video, even though she doesn't remove the keel bone. HOWEVER, she DOES tuck the wings, which is an improvement over the first guy. She also shows a little bit about cutting the bird after it's cooked.

Both techniques will work, as the main goal is simply flattening the chicken. I personally use a large chef's knife, rather than the kitchen shears. I place my bird on the cutting board, with the backbone done. I stick my knife into the cavity, just to one side of the backbone, pushing the entire length of the knife through, so that the tip is sticking out near the neck. Then, with force, I push the knife straight through the ribcage. I move the knife to the other side of the backbone and repeat. Two swift moves and the backbone pops right out! From there, I remove the keel bone like the gentleman in the first video, then fold the wings like Hilah!

Once your bird is flattened, you can do what you'd like with it. Roast it, pan fry it, smoke it, grill it, etc. All are options! I've got a very simple herb rub and roasted it in a pan. Nothing more is really needed with a good well cooked bird!