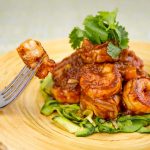 The idea for this dish came from a few places.
My family started visiting Mexico before I even have memories of our trips. I was born in Southern California, in the United States. My parents would drive their van across the border and enjoy the Mexican culture and food of the mid-70's. As I grew, they simply never stopped! When I was about 6 years old, we moved away from Southern California, to a town just outside of Yosemite National Park. Shortly thereafter, we would fly to Mexico, at least once a year. After having lived there for almost 10 years, I'm actually close to being an actual Mexican citizen! My family has a great love for Mexico.

There is a restaurant in Puerto Vallarta called "Posada Rio Cuale". This was my favorite restaurant on earth in my teenage years. Aside from all the table service they provided, doing fancy things like cutting a spiral in the rind of an orange, hanging it down, pouring booze on it and igniting it, making a flaming, swirling waterfall (fiery boozefall?). Always a good show!

If memory serves (it doesn't always), customers had the option to choose their level of heat. On a scale of 1 to 5, my father always ordered the 9. Then, he would sit in the hot Mexican weather, dripping with sweat and revel in his pure delicious pain. His face would turn bright red and he'd just look miserable! He had to breath in and out, in rapid succession, or else ... I assume he'd spontaneously combust! There was always a deep fire raging within him, as he'd delight in his big bowl of Shrimp Diablo.

Between you and I, faithful readers ... I've never quite understood the joy that the chili pain can bring. I like a little kick, but I don't want to suffer while I eat. Not my father, though. He likes it HOT!