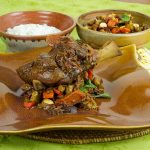 This one has a bit of a strange inception. It was actually inspired by Karen, from Living Low Carb, One Day at a Time. She attended the Annual Low Carb Cruise, but didn't want to leave her blog unattended while she was away. She sought some guest authors and I responded. Around the same time, Karen had placed a Lamburger on her website with the comment she's new to lamb. About the same time I went to an Italian restaurant and ordered a gigantic lamb shank. This was the special of the evening and came highly recommended by the server. I LOVE lamb (I almost typed lamp. Whoops. I love lamp. I LOVE LAMP!) ...

Most of the time I eat lamb rack or leg. It's not often that I eat shank. Frankly, it's not offered very often. It just slips my mind! While I definitely subscribe to a lot of the Paleo ideologies, I don't embrace them as closely as Karen does. In knowing I was about to do a guest post for Karen, while eating this soft, mouthwatering lamb shank, I decided I wanted to shank it up for her! In my mind, I thought it would be fun to write a guest post as Karen, the cavewoman. A big piece of meat, with a gignomous bone sticking out of it seemed right up her alley; a cute idea, anyway. I decided to take the flavors a little south of Italy, into Morocco, also adding some dried fruits and orange juices (hence the DANGER!). PERFECT!

After I made it, I really thought about it and came to the conclusion that while it's a thoroughly (truly amazing, actually!) delicious dish, it's probably not terribly approachable for most. Not only are shanks be a bit tough to find, but it takes a while and lamb has a tendency to be on the gamey side, scaring many off. (Sidenote: this dish is NOT gamey!) I really wanted to give Karen something that would fit her site, but ALSO something with a little more wide-spread appeal. Thus, I went for the equally amazing brown butter pie! (part 2, here).

To make a long story short, here's the recipe! I can't stress enough how special this dish is. The flavors and spice, slowly simmering with these smooth, almost "buttery" pieces of bony shank ... are MORE than worth the time it takes to make. If you've ever got a special evening on the horizon, you could do MUCH MUCH worse than this. Just spectacular ... truly.