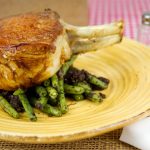 THIS is a serious pork chop! There's no fooling around with this one. This double cut pork chop has been brined and then stuffed with sausage. I do believe that this treatment renders about as moist and flavorful a pork chop as one could create. I really don't know that I know how to make a better chop!

I have no qualms about saying a recipe is bad, didn't work, isn't what I wanted, etc. However, on the flipside and from this same ethos, I judge recipes that DO work. I do not hesitate to say that this pork dish and recipe is nothing short of outstandingly magnificent!

First, there's the procurement of the pork, itself. It's not likely you're going to walk into the local grocery store and see a double cut pork chop. However, most grocery stores do have butchers who will cut specific things for you, if they have the product in the cooler. It may not hurt to call ahead, but my gut tells me that finding a full bone-in pork tenderloin isn't that difficult. Then, explain that you want it cut "Double Cut and Frenched". This means that they will cut the chop every TWO ribs, rather than just one (like most pork chops). "Frenched" means that they clean the fat and sinew from around the bone, making a nice attractive appearance.

Next, we're going to create a brine. I have another recipe where I brine chicken (I love brining pork, chicken and turkey! It's so easy to do and makes SUCH a big difference!). Read my other brining recipe for details (Maple Brined Pork, too!), but I do want to make a quick point. Yes, there are some veggies and aromatics in this brine, but they are purely optional. The ONLY required part is the salt and the water. If you brined this pork in a salt water solution for a few hours, you'll be THRILLED you did! (I only mention this because I've heard comments that the extra "stuff" looks complicated ... it's totally optional, but does lend one extra level of complexity in flavor).

Finally, this pork chop has been split between the bones and packed with raw Italian sausage (sweet or spicy). Pork chops don't have a lot of fat, which tends to make them a fairly dry piece of meat. Sausage, on the other hand, is FULL of fat. If you stuff a dry piece of meat with fat, some of that fat is going to melt into the chop and add moisture, as well as additional flavors from the spices in the sausage!

These various steps will give you an almost life changing beast of a pork chop. It may seem like a lot of effort for a pork chop, but ... when you try it, you'll understand why the time and effort was worth it. This pork chop will change the way you see pork chops. It's THAT good!
Prep Time15 mins
Cook Time25 mins
Total Time6 hrs
Servings: 4 Servings
Calories: 821.515kcal
Author: DJ Foodie