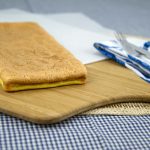 So ... I'm not much of a low-carb baker. My strengths lie more in a world of bacon and broccoli and less in the world of stevia and coconut flour. Even in the time before time I was skilled in pasta and pizza, but far less so in cake and cookies. There are a wide variety of culinary disciplines and ... "baking" was just never really one of them. (that said, I was a professional baker for a year and AM quite good with yeast leavened flour based doughs, but ... that's ancient history)

Ahem! In one of my many attempts to gain an understanding of coconut flour, I decided to try for a standard white cake. My hope was that I could come up with a light cakey-like pastry, with which I could do many things. The end result was light and tasty, but not quite as stable as I'd hoped. It rose, but just as quickly fell, when taken from the heat. Re-dubbed "Sponge Cake".

I am absolutely certain that this would be absolutely yum with something like 4 of these baked, and then stacked with jam and berries between them, or a spiced cream cheese spread, or a wicked yum cinnamon butter and an orange cream cheese frosting!

I think this is a stellar starting point for something wonderful. Expect me to grow this into something over time. For now, because I wasn't sure what to do, I chopped it up and put it into a bowl with strawberries and vanilla pudding. A great way to go, but ... there's always room for improvement (and Jell-O) apparently!).
Prep Time15 mins
Cook Time20 mins
Total Time35 mins
Servings: 4 Servings
Calories: 82.295kcal
Author: DJ Foodie