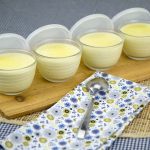 This is a kind of strange recipe. I'm not really sure what to call it, or what it is, or why I'd want one. HOWEVER! It WAS tasty, whatever it was! I also liked how it was individual servings, which made it nice to pop open a new one and eat it. I'm a big fan of portion control. Give me a bowl of food, I'm going to eat the whole bowl. If it's a large bowl ... GONE! If it's a small bowl ... GONE! So, it's best to give me a small bowl.

In any event, my goal was to create a vanilla pudding, but I think what I made was closer to a "custard" in terms of taste and texture. Interestingly, I think this last statement is confusing to people in Europe, as I believe they define those terms differently than in the U.S. To me, a "pudding" is creamy and can be swirled around and coat the back of a spoon. Normally this is thickened with corn starch and is VERY commonly store bought in a little colorful box. A "custard" is an egg thickened "pudding" ... which gives a different texture. One is starch based thickener and the other is protein. My aim was to get something resembling a creamy and thick American style "pudding", by creating a stirred pudding base, thickened with gelatin (another protein). I suspected that I wouldn't get what I was after, and I was correct. The end result was perhaps more like a Custard Panna Cotta, which ... is awesome, wonderful and totally delicious. It's thick, sweet and full of tasty flavor, but ... it's just not what I was after!