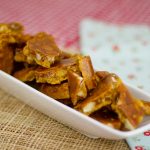 I have a tendency to undersell things. I've been told this my whole life. I tend to present things that I feel could be better, as if they are "less than", even though they're actually still pretty awesome, in some way. I think that what happens is, I form these fantasies of what something COULD BE, in my mind. Then, when the reality isn't as good as the fantasy, I'm always little dejected. Other people don't share my looney fantasies. They are just presented with something generally pretty great, but with a healthy slice of my lackluster delivery. They usually respond something like, "Hey, whaddyamean!?! This is FANTASTIC!"

The texture had that very subtle grainy quality that stems for an over concentration of erythritol. It also had the "cooling" sensation. I tried to bulk it out with some tagatose, but I was afraid to use too much (it's rumored to give the pooties if eaten in excess, but I did not experience this). I wanted to play with the tagatose, but do it without any of the negative qualities or nasty side effects. This recipe is likely to serve more as a novelty or source of interest, as opposed to coming from me as a highly recommended recipe. I do think it's an incredibly interesting idea and perhaps there is something to it. Maybe with more tagatose, it will take on a greater sense of "brittle", but the caramel was so thin when I made it. tagatose colors more quickly than sugar does. As a result, it's my fear and belief that it would burn before it reaches the same level of "hard ball stage" needed for a true brittle. Erythritol, as awesome as it is, did crystallize. This is somewhat to be expected. I mean, it's almost all pure "sugar"! It's not like a baked goodie or an ice cream, where the erythritol is more evenly distributed in and amongst other stuff. This is just pure concentrated sugary-like stuff! When it cools, it crystallizes because it's not been sufficiently diluted in other stuff.

So ... in the end, I leave you with some beautiful photos of a sweet, slightly salty, and action packed toasted coconut and macadamia nut brittle. It was awesome, but ... just ... not what I was hoping it would be.

On that note, I realize I now have a few recipes posted to the site that I personally feel were failures. I don't do it often (I have MANY more failures than this site lets on), but I tend to think there's a lesson in here, somewhere. Please post in the comments if you think there's merit to posting a recipe like this, or if it's just kind of a big bait and switch and a bit of a downer. I'm curious. Let me know!

Tagatose Note: I couldn't find very good information related to calculating the "net" carbs for the tagatose. However, the manufacturer states that "Only 15-20 percent of tagatose is absorbed in the small intestine." As a result, I'm going to to suggest that 25% is, just to play it safe. The net carb count will be calculated, thusly.
Prep Time5 mins
Cook Time15 mins
Total Time1 hr
Servings: 12 Servings
Calories: 91.770833333333kcal
Author: DJ Foodie