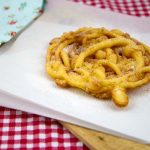 I have a text file on my computer called "MintChocolateChip.txt". It's been bopping around my machine for several years. When I very very first began low-carbing, it was always open on my desktop. As I'd scour the web looking for interesting ideas and new ways to be low-carb, I'd jot down recipes, ideas and ratios. I did this for probably 6 months and then, one day, inexplicably ... I just stopped. I assume I'd found a groove, or decided I no longer needed to add anything to it. For the most part it's where my personal sugar mix recipe lived, in and amongst the other ice creams and pie dough recipes.

One of those recipes was for "fried dough". Like most of the other recipes, I don't know where I got it, or if I just made it up, on the spot. Whenever I don't know where something came from, I like to give a plug to LowCarbFriends.com, as they were the source of almost all my early discoveries. In any event, because I don't own a fryer, I'd never made it! Recently I had wanted to try some fried foods. So, one day, a few weeks ago, I set up a fryer in a big pot with a candy thermometer. I tried a few different recipes. Some were great and some weren't. My fried chicken, for example, was the debacle of debacles. Oh, what a disaster! This recipe, on the other hand, was EXCELLENT! Hot and fresh from the fryer, topped with some powdered Swerve, cinnamon and nutmeg ...

This recipe was the cat's meow!

Note: I couldn't even begin to guess how to handle the nutrition facts on this one. I've completely omitted the nutritional information on the coconut oil, even though I'm certain some portion of it is eaten. I feel confident the carb count is accurate, but it's likely to be much higher in fat.
Prep Time5 mins
Cook Time5 mins
Total Time10 mins
Servings: 2 Servings
Calories: 338.25kcal
Author: DJ Foodie