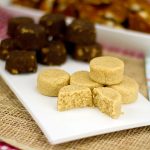 I'm asked a lot of questions as a result of my website, but also the change its had on my own life. It's undeniable that there have been positive results from this change to my diet. Amongst those questions, there is one I'm frequently asked that I never had much of a response to. That question was, "Do you have any recipes to help boost my protein in the morning?" I usually respond with something like, "Sure! Try my 'Poorly Cooked Eggs' recipe!" This is usually followed up with a headshake and a question about protein powders.

I've never really gotten into protein powders. I suspect there's no lack of protein in my diet. I do eat a lot of meat; very rarely having a meal without some form of animal protein. As a result, I've just never gotten into them! I do own some and I have played with it, but not enough to claim any level of proficiency with it. For me, it's just a tasty powder that makes my shakes taste just a little extra yummy. For me, it's a shake flavor enhancer. I've never been in it for the protein.

However, lately, I've just been sort of ... meated out ... it's the strangest thing! To remedy this, I've been dumping egg protein powder into chia seeds and making a bit of a morning porridge (YUM!). This seems to fit the bill!

Anywhoo ... in an attempt to give SOME kind of answer to this question, I'm adding this PB Protein Pucks recipe to my website. The weird part is, I don't know where I got it from! It's in my notes. I may have made it up, but ... don't remember creating it. If I stole this from you ... I'm sorry! I didn't mean to!

Here's the inception of this idea:

I LOVE Dixie from LowCarbZen.com and her Low Carb Eating Facebook page. She's done more for me than another other stranger ever has. She was an early supporter and still is just a rock star in my life. In any event, she had been asked the same question and floated it on her Facebook page. This was responded with a variety of recipes, but it was the Peanut Butter Squares that really seemed to attract the most attention. Dixie then asked if anyone had a photo! That's when this particular seed was planted in my mind and the idea went into my notes. Roughly a week later, someone else either took a photo, or found one. Here's that photo, along with corresponding recipe. In my mind, I stole THIS recipe, except ... I DIDN'T! My recipe and this recipe are different, by quite a bit!

There does stand a good chance that I just made it up and wrote it down as I threw things into the mixer, but ... I have no recollection of that. Maybe it's some kind of divine intervention? Perhaps!