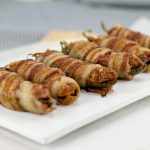 First of all, let me just say that I have no idea where the name for these things came from. I didn't name them, although I'd happily take the credit! While it's a definitely a horrible sounding name for a delightful foodstuff, it's also a playful and memorable one. Who could really forget that they went to a BBQ last weekend and had about 18 Atomic Buffalo Turds! Talk about water cooler talk!

More often than not, possibly due to the PG-13 rating of its title, or perhaps the scatological nature of its designation, they are frequently listed by their initials: ABT's

Alternately, these could be called "Bacon Wrapped and Chorizo Stuffed Jalapeños", which is what they are. This may be what you'd call them when talking to your mother, but for me and my smoker buddies ... the name stays. Some people seem to call these Jalapeño Poppers, but ... to me ... these are a different animal. Poppers are stuffed with cream cheese, breaded and fried. On the other hand, an ABT is stuffed with meat, wrapped in bacon and is smoked. ABT's are a part of a BBQ scene. They live in a world of tailgate parties, backyard BBQ's and sunny days. They live in a land of exotic sounding wood names, large pieces of pork and deep bowls of colorful coleslaw.

An Atomic Buffalo Turd is actually not that spicy! Sure, they've got a little kick to 'em, but because part of the process involves scooping out the seeds and internal ribs, most of the capsaicin is removed, rending the chilies relatively feeble. If you'd like to make them hotter, feel free to throw some of the seeds into the chorizo, before stuffing. This'll give 'em a little boost!