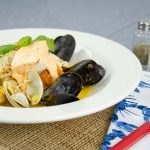 Julia Child once wrote: "to me the telling flavor of Bouillabaisse comes from two things: the Provençal soup base — garlic, onions, tomatoes, olive oil, fennel, saffron, thyme, bay, and usually a bit of dried orange peel — and, of course, the fish — lean (non-oily), firm-fleshed, soft-fleshed, gelatinous, and shellfish."

Bouillabaisse is a French seafood stew, originating over 2,500 years ago, in the South Eastern part of France. It's usually a blend of both fish and shellfish. The core focus is on using very fresh seafood. The fish should wiggle, as it's cooked. Additionally, it should use and very local seafood, which can be tough for the people of Denver. As a result, TRUE Bouillabaisse can really only come from France and use French seafood, French herbs and French vegetables. Alas, my version ... is a cheap knockoff!

As is always the case, the fresher the better. The closer to the actual food source you are, the better (usually). Meaning, if you know the farmer who grew your onions, or the fisherman who caught your fish, you're that much closer to a sublime Bouillabaisse experience. If you grow or catch your own, your stew will be even that much better!

Now, because the overwhelming majority of us are not in France, and we don't eat bread, I've had to modify my recipe to be somewhat neutral in geography and lower in carbs. If you have both the access and the desire to add sea creatures such as eel, sea urchin, octopus, scorpion fish and spider crabs, definitely, completely, totally throw it in there (in due time, of course). I have opted out of these regional specifics, knowing the local grocery store is unlikely to carry these things. However, by no means does that diminish the time, care and attention that went into creating this really quick-to-make and amazing bowl of fresh brothy seafood!