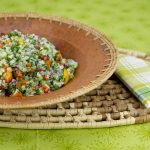 I lived in San Francisco in my late teens and early 20's. A great place to be in your youth! One of my absolute favorite haunts was a restaurant called "Kan Zaman", which apparently shut down in early 2013, sad-to-say. This upper-Haight restaurant was ACTION PACKED in the early 90's. It's clear they had a good 20+ year run, which is pretty spectacular by any measure (most restaurants don't make it more than a year or two!). The food was Middle Eastern; everything was shared, family style. Alongside one wall was a row of pillows, where you could sit, comfortably on the floor with friends, while sipping warm spiced wine and pick over foods like falafel, baba ganoush, shawarma, stuffed grape leaves, hummus, all manner of grilled meat on sticks and ... the fresh herbed tabbouleh!

After dinner, you could request a hookah and smoke apple scented tobacco, while watching belly dancers twirl around with swords. An amazing place at a special time in life ... It's interesting to me that "Kan Zaman", in Arabic means "A long time ago ..."

In any event, this is the place and time that introduced me to the amazing foods from the Middle East. Fresh and simple, with mouthwatering blasts of herbs and spice!

Tabbouleh is a salad harking from the eastern Mediterranian, between Anatolia and Egypt. You might find Tabbouleh in countries like Syria and Lebanon. Traditionally it is made with Bulgur wheat, tomatoes and a mixture of mint and parsley. In fact, I've been told many times in my life that the chopped herbs should be about equal to the bulgur. I've even seen recipes which were almost all herbs, with only a small amount of bulgur. It's FULL of herby goodness!

Throughout my adult life, I've seen this dish recreated a million times. Here I am, throwing my little low-carb spin at it. Mine is full of veggies and herbs, as well as my miracle cauli-rice. This gives both a little boost of natural flavor, while adding bulk and some texture. I was so excited when I made it, because I love Tabbouleh. I love the bright acid flavors, and all the textures of the fresh raw vegetables. I wanted so badly for this to match the Tabboulehs of my youth and it was SOOO close! SOOOOO CLOSE! It's tough to give this a B, but ... I'd be lying if I called it a home run, or an "A". It was everything I wanted in a toubouleh, from the health aspects to the colors and textures. It was wonderful, on all fronts. The only way I can describe it, in as truly honest a way as I can ... it was just ... somehow ...

There was an earthy depth that the bulgur brings to this dish, and this missed that particular element. The last thing I want to do is talk you out of this. It is really quite good, much better than most low-carb replacements that I've seen, but ... it's a B. Bring it to the next Potluck, where everyone else is going to bring their "C" Game!