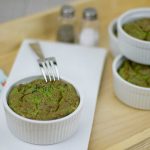 A "Soufflé" is a puffy French "cake", made primarily from whipped egg whites. They are always served hot and with immediacy. They are frequently sweet desserts, but not always.

I had my first Soufflé as a kid, at the "City Hotel" in Columbia, California. It was a fancy restaurant in the center of a historic "Gold Rush" town. I'll never forget it, either. This was the kind of place that had "tableside service", meaning they would actually prepare part of the food ... right there at the table! As a child foodie, there was nothing more thrilling than watching our server whip up a classic Caesar Salad, right at the table, or catch a big pan of cherries on fire and pour it over ice cream. This place was special and still stands out in my mind as one of my first introductions to fine dining (circa 1983).

One of the dishes was a "Soufflé". It was so special, that you had to order it BEFORE your dinner. It was made FRESH. Before being ordered, it was merely ingredient parts, scattered around a kitchen. Once the order was placed, in my mind, an army of men and women ran around the kitchen collecting the magic powders and golden elixers required to create the delicate protein matrix holding in all the hot precarious air in place, as this steaming and quivering sweet cylindrical cloud would be carefully delivered from the kitchen. The server would set it down in front of me, where I could smell the caramelized edges of the cake. He'd poke a hole in the middle of it, and then pour a warmly flavored custard sauce directly into the center of my prize. Pure ecstasy!

Perhaps one of these days, I'll do a sweet soufflé. There is no reason I couldn't do one. They are mostly egg, afterall. (egg and hot air, like I imagine an irate Humpty Dumpty would be).

This one was originally designed as a somewhat fancy brunch idea; really any breakfast or brunch, where a little elegance is in order: Mother's Day, perhaps? Easter? Visiting family members? There are so many times in life where a beautiful green soufflé is needed. Now, you have one!

Note: Soufflé's all puff up when baking, but are notorious for "falling" or "deflating" once they are removed from the oven. In this case, they all fell. I suspect it's because of the vegetables within it, but I also may have jiggled them. If you were to remove the vegetables, sauté them, poke a hole in the soufflé after it was baked and pour them in, you're more likely to retain the tall and puffy shape. In all cases, it's still light, green, fluffy and yum.
Prep Time20 mins
Cook Time20 mins
Total Time40 mins
Servings: 6 Servings
Calories: 236.25333333333kcal
Author: DJ Foodie