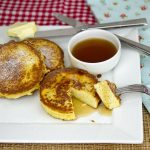 This is probably the closest to flat out plagiarism as I've come. However, I HAVE changed enough of the steps and ingredients, so that I may protect the (not-so) innocent (me!).

I'm a big fan of Chowstalker.com. They do an excellent job of attracting recipe developers within the paleo/primal/low-carb world and then sharing their collective recipes via a very simple image display. In addition to their main page, they also share recipes via their Facebook page. One day, I was lurking on their page and noticed a post about "Paleo-friendly English muffin in a hurry". It seemed interesting, so I read about it. At its core, it's a one-minute-muffin, made with coconut flour and shaped a little more like an English muffin, rather than a ... hmmm ... puffy American one? (People of England ... what do you call Muffins, over there?)

Then, I read the comments on the Facebook page. Someone named Sve Ta suggest that "you can do french toust, too". Immediately, I knew I wanted that!

So, this whole recipe came about because Chowstalker shared this paleo English Muffin recipe and someone else commented that French Toast could be a way to go.

(just so I don't feel like I've TOTALLY stolen this, note that I have made French-Toast like goodies with OMM's before)

This one, however, somehow took it to a new level. This may very well be the best thing to come out of my kitchen in a good long while (and some decent stuff comes out of there, too!)

Baking Note: It makes some sense to simply grease a 12-cup muffin pan and bake these for about 12 minutes at 400 F. Then, pop them out of their cups and slice them in half, so they can cool and will absorb the egg mixture more quickly and fry more evenly. Will result in 24 discs, instead of 12.