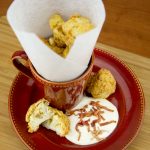 I'm pretty sure that everyone loves a small fried nibblet, of some kind. Even those of that that scoff at the idea of frizzle fried food stuffs, I secretly suspect that you privately pine for these greasy snacky tidbits. You know it's true! Throw a little bacon into the mix and it becomes almost transcendent.

These little fried nuggetlettes aren't so different from my chicken nuggets. The primary difference being the lack of chicken and the introduction of cauliflower. Additionally, chicken has a higher moisture content than raw cauliflower. The breading has a tougher time adhering to the outside of the cruciferous vegetable. As a result, I've added a light dusting of the hungry coconut flour to the process. This helps the eggs adhere to both the cauliflower, as well as the "breading".

For whatever reason, the breading clumped up much more with this ingredient than it did with the chicken. I can only imagine that with less overall moisture, that the "crust" wasn't as thick, resulting in more left behind in the dredging vessel. Towards the end, I was essentially putting balls of the raw almond meal mixture into my palms, placing a floret into the middle of the ball, and then squeezing the mixture all around it, prior to frying it up. This absolutely worked, while also making a thicker crust!

Photo Note: I made a special Hollandaise sauce for this, as a dipping sauce. However, rather than using butter as the fat, I used rendered bacon fat. This made for a more bacon-y flavor, while also giving me a use for the bacon fat I've always got lying around the house! Here's a Béarnaise sauce recipe. Use this as the basis for your Hollandaise. Just leave out the herbs. To make it lighter in color and bacon flavored, simply swap out the fats!
Prep Time10 mins
Cook Time15 mins
Total Time25 mins
Servings: 6 Servings
Calories: 610.50333333333kcal
Author: DJ Foodie